Red China took possession of Tibet or seized Tibet using her superior military power. Red China told a lie when she claimed about peaceful liberation of Tibet by People’s Liberation Army. Red China is an occupying force that faces eviction from Tibet when Peace, Freedom, and Justice will prevail again. It is interesting to note that people of ancient Tibet had faced similar threats from external aggressors.

Vestiges of a once flourishing prehistoric civilization dot the landscape of Upper Tibet.

For more than two decades, University of Virginia Tibet Center archaeologist and historian John Vincent Bellezza has been exploring highland central Asia, going places where few archaeologists and explorers have ventured. Since 1992, he has investigated and documented scores of monumental sites, rock art, castles, temples, residential structures, and other features on the desolate reaches of the TIBETAN PLATEAU, building a knowledge base on a vast archaic civilization and ancient religion that flourished long before Buddhism emerged and dominated this otherwise comparatively sparsely populated high altitude region.

“Commonly, when people think of Tibet, Buddhism comes to mind,” writes Bellezza in his newest book, THE DAWN OF TIBET. By this he also implies the better-known and popular images of the imposing, sky-high, mountaintop monumental wonders of Buddhist centers such as Lhasa. But, he continues, “before Buddhism was introduced, a different type of civilization reigned in Tibet, one with monuments, art, and ideas alien to those of more recent times……….Demarcated through an enormous network of citadels and burial centers spanning one thousand miles from east to west, it would endure for some fifteen hundred years.”*

Bellezza is describing an archaic civilization known as ZHANG ZHUNG, which flourished from about 500 BC to 625 AD and encompassed most of the western and northwestern regions of the Tibetan Plateau. Mastering an ancient technology base not normally attributed to people of this region in the popular perception, the people of Iron Age Zhang Zhung, according to Bellezza, built citadels, elite stone-corbelled residential structures, temples, necropolises featuring stone pillars, sported metal armaments and a strong equestrian culture, established links with other cultures across Eurasia, and exhibited a relatively uniform and standardized cultural tradition rich in ritualistic religious practice, where kings and priests dominated the highest rungs of power. These are all characteristics of stratified, centralized and developed societies most often associated with the more southerly, lower-altitude great Old World Bronze and Iron Age civilizations that ringed the Mediterranean as well as the advanced civilizations of Mesoamerica and South America. The supporting findings on the landscape, when considered across two decades of investigation, have been nothing less than prolific. 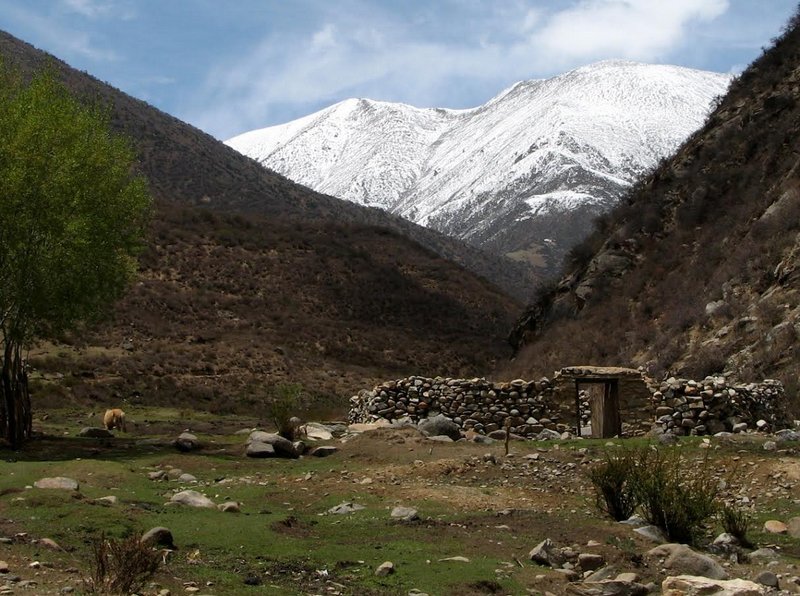 The Tibetan Plateau features ancient stone structures, many of which date back to the First Millennium B.C. McKay Savage, Wikimedia Commons

But this archaeological evidence, according to Bellezza, also opened a window on a civilization that heavily fortified itself from threats both within and without. The struggle for resources in a land where climate gradually changed over preceding millennia from one that was relatively warmer and moist to one that was cold and dry may have played a significant role in this. Competing external and internal forces may have played another. “Most archaic era residential facilities in Upper Tibet were built on unassailable high ground, on inaccessible islands, or in hidden spots, “ writes Bellezza. “This insularity indicates that defense was a preoccupation of the population. Eternal Bon historical sources speak of the martial character of Zhang Zhung society and its political nexus of kings and priests.” Even the priests were depicted in the literature as possessing arms. On the other hand, notes Bellezza, “these literary accounts also hold that the ancient priesthood was very adept in the practice of astrology, divination, magic, and medicine.”*

With much still awaiting discovery and study, Bellezza continues to explore and analyze the massive trove of data he has already compiled on this ancient people. In time, he and other researchers hope, by merging references in the literary sources with the accumulating new archaeological evidence, a sharper focus on an otherwise obscure and ill-understood civilization will emerge.