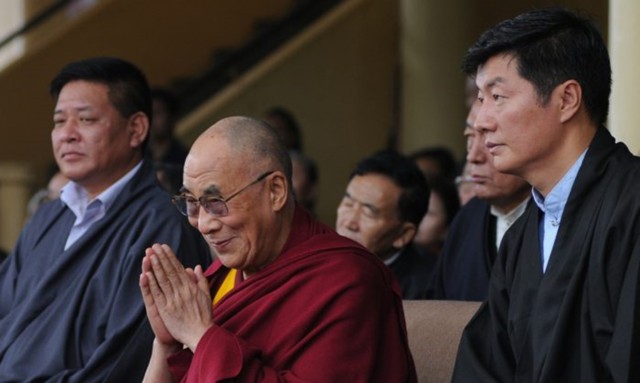 Tibetan spiritual leader the Dalai Lama (C), flanked by President of the Central Tibetan Administration Lobsang Sangay (R) and Speaker of the Tibetan Parliament-in-exile Penpa Tsering (L), greets the audience during the 52nd anniversary of Tibetan Democracy Day at the Tsuglakhang Temple in McLeod Ganj, Dharamsala on Sept. 2, 2012. (STRDEL/AFP/Getty Images)

Amidst an escalating diplomatic and economic standoff between the United States and the Chinese communist regime, the U.S. Congress has approved a massive spending bill that includes $17 million that will be used to support Tibetans in and out of Tibet. This includes the Tibetan government-in-exile, which is vehemently opposed by the Chinese regime that currently rules over Tibet.

The funds were earmarked through the Consolidated Appropriations Act of 2018 and include $8 million for Tibetans inside Tibet and $6 Million for Tibetan community in India and Nepal. On top of that, Congress created an additional new line of funding of $3 million to strengthen the capacity of the Tibetan government in exile and Tibetan institutions.

“We remain thankful to the U.S. government and Congress for their generous financial assistance towards the Tibetan community,” said Dr. Lobsang Sangay, president of the Tibetan government-in-exile, officially known as the Central Tibetan Administration (CTA).

The CTA is headquartered in Dharamshala, India, and effectively represents the Tibetan exile community in India, which numbers around 100,000. It also claims to represent the people of the entire Tibet region, which has been occupied by the Chinese regime ever since its military invasion of Tibet in 1950.

The increase of funds granted by Congress alleviates concerns that U.S. support for Tibet might be dwindling, as the Trump administration’s slashing of State Department budgets in 2017 had at the time raised fears that funding for Tibetans might be cut or terminated completely.

The funding is consistent with the decades-old U.S. policy of providing support for the Tibetans and the Tibetan exile government, despite the Chinese regime’s consistent opposition to such aid, which it sees as meddling in China’s domestic affairs.