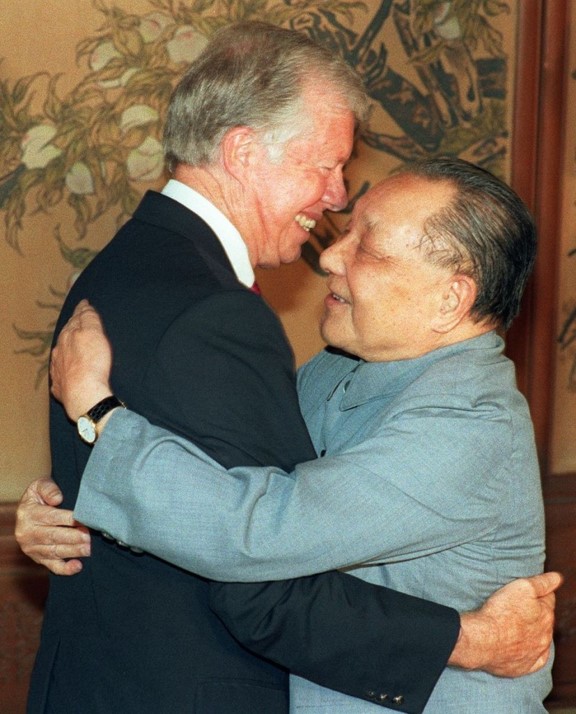 United States lost sense of direction in departing from national values to oppose Soviet Union’s invasion of Afghanistan. US foreign policy is misdirected in two manners; these are, 1. Cementing closer relationship with Communist China by giving it official recognition in 1979, and 2. Fighting Soviet occupation of Afghanistan by raising radical Islamic militias. It’s no surprise to find US fighting the “FOREVER WAR” in Afghanistan with no relief in sight.

1980
In an action obviously designed as another in a series of very strong reactions to the Soviet invasion of Afghanistan, U.S. officials announce that America is ready to sell military equipment (excluding weapons) to communist China. The surprise statement was part of the U.S. effort to build a closer relationship with the People’s Republic of China for use as leverage against possible Soviet aggression.
The announcement concerning military equipment sales was one of many actions on the U.S-China front taken in the wake of the Soviet intervention in Afghanistan in December 1979. The U.S. Congress, on the same day, approved most-favored-nation trading status for China. In addition, an agreement was signed for the construction of a station in China that would be able to receive information from an American satellite; such information would aid China in such fields as agriculture and mining. The proposed sale of military equipment, however, was the most dramatic and controversial move made by the administration of President Jimmy Carter. Though such equipment would be limited to non-weapon materiel related to such areas as transportation and communications, the step was a significant one in terms of the developing U.S.-China relationship. The fact that the announcement occurred so soon after the Soviet action in Afghanistan was no coincidence–as one U.S. official noted, that action “sped up or catalyzed the process.”
The Carter administration’s decision to sell military equipment to communist China barely a year after establishing diplomatic relations with the People’s Republic of China was an indication of just how seriously the United States government viewed the Soviet attack on Afghanistan. The U.S. response to the Soviet Union was multi-faceted and vigorous, including diplomatic broadsides, economic sanctions, and even boycotting the 1980 Olympic games in Moscow. Many political analysts believed that the Soviet Union’s invasion of Afghanistan was a grievous diplomatic error, as it virtually ended any talk of détente with the United States.