TIBET’S FUTURE – HOW TO FIND PEACE, HARMONY, AND TRANQUILITY?

Doom Dooma Doomsayer understands problems faced by Tibetans. I am not a Monk, Priest, or Member of Clergy. I am not a Prophet. However, my rational analysis of events leads me to announce Beijing’s Doom. Without recourse to any kind of human intervention, Red China faces Eviction From Occupied Tibet.

Tibetans’ culture is changing, by their own will as well as by force 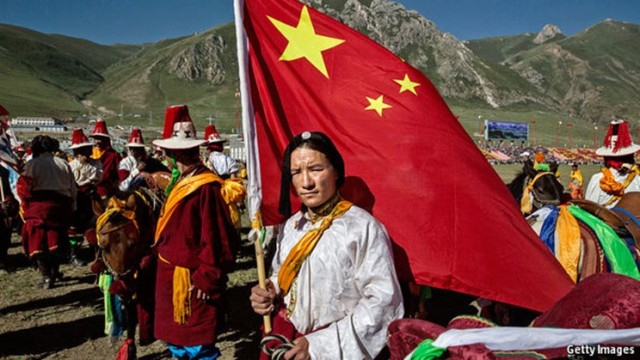 AN ELDERLY woman with long, grey plaits, wearing a traditional Tibetan apron of wool in colourful stripes, has spent her day weaving thread outside her home near the southern end of Qinghai Lake, high on the Tibetan plateau. She is among hundreds of thousands of Tibetan nomads who have been forced by the government in recent years to settle in newly built villages. She now lives in one of them with her extended family and two goats. Every few months one of her sons, a red-robed monk, visits from his monastery, a place so cut off from the world that he has never heard of Donald Trump. Her grandson, a 23-year-old with slick hair and a turquoise rain jacket, is more clued in. He is training to be a motorcycle mechanic in a nearby town. Theirs is a disorienting world of social transformation, sometimes resented, sometimes welcome.

Chinese and foreigners alike have long been fascinated by Tibet, romanticizing its impoverished vastness as a haven of spirituality and tranquility. Its brand of Buddhism is alluring to many Chinese—even, it is rumored, to Peng Liyuan, the wife of China’s president, Xi Jinping. Many Tibetans, however, see their world differently. It has been shattered by China’s campaign to crush separatism and eradicate support for the Dalai Lama, their spiritual leader who fled to India after an uprising in 1959. The economic transformation of the rest of China and its cities’ brash modernity are seductive, but frustratingly elusive.

The story of political repression in Tibet is a familiar one. The Dalai Lama accuses China’s government of “cultural genocide”, a fear echoed by a tour guide in Qinghai, one of five provinces across which most of the country’s 6m Tibetans are scattered (the others are Gansu, Sichuan, Yunnan and the Tibet Autonomous Region, or TAR—see map). “We know what happened to the Jews,” he says. “We are fighting for our existence.” Less commonly told is the despair felt by many young Tibetans who feel shut out of China’s boom. They are victims of Tibet’s remote and forbidding topography as well as of racial prejudice and the party’s anti-separatist zeal. They often cannot migrate to coastal factories, and few factories will come to them. Even fluent Mandarin speakers rarely find jobs outside their region. 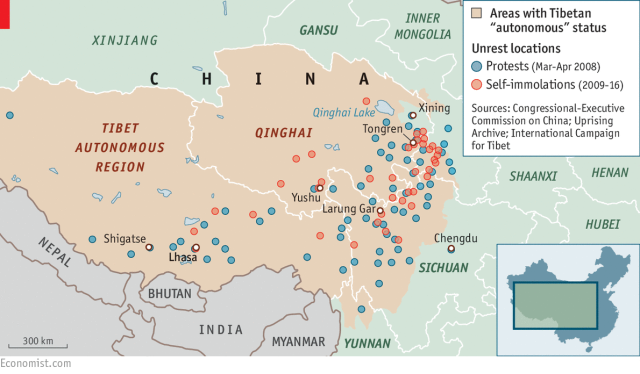 Yet Tibetans are not cut off from the rapidly evolving culture of the rest of China, where more than 90% of the population is ethnic Han. Mayong Gasong Qiuding, a 26-year-old hotel worker in Yushu in southern Qinghai, listens to Mandarin, Tibetan and Western pop music in tandem. He can rattle off official slogans but can recite only short Tibetan prayers. His greatest wish, he says, is to go to the Maldives to see the sea. Tibetan women in Qinghai use skin-whitening products, following a widespread fashion among their Han counterparts; a teenager roller-skates anticlockwise around a Buddhist stupa, ignoring a cultural taboo. Young nomads frustrate their elders by forsaking locally-made black, yak-hair tents for cheaper, lighter canvas ones produced in far-off factories.

Han migration, encouraged by a splurge of spending on infrastructure, is hastening such change. Although Tibetans still make up 90% of the permanent population of the TAR, its capital Lhasa is now 22% Han, compared with 17% in 2000. Many Tibetans resent the influx. Yet they are far more likely to marry Han Chinese than are members of some of China’s other ethnic groups. Around 10% of Tibetan households have at least one member who is non-Tibetan, according to a census in 2010. That compares with 1% of households among Uighurs, another ethnic minority whose members often chafe at rule by a Han-dominated government.

Core features of Tibetan culture are in flux. Monasteries, which long ago played a central role in Tibetan society, are losing whatever influence China has allowed them to retain. In recent years, some have been shut or ordered to reduce their populations (monks and nuns have often been at the forefront of separatist unrest). In July buildings at Larung Gar in Sichuan, a sprawling center of Tibetan Buddhist learning, were destroyed and thousands of monks and nuns evicted. Three nuns have reportedly committed suicide since. Of the more than 140 Tibetans who have set fire to themselves since 2011 in protest against Chinese rule, many were spurred to do so by repressive measures at their own monastery or nunnery.

Cloistered life is threatened by social change, too. Families often used to send their second son to a monastery, a good source of schooling. Now all children receive nine years of free education. “The young think there are better things to do,” says a monk at Rongwo monastery in Tongren, a town in Qinghai, who spends his days “praying, teaching [and] cleaning”. New recruits often come from poorly educated rural families.

In the TAR (which is closed to foreign journalists most of the time), the Tibetan language is under particular threat. Even nursery schools often teach entirely in Mandarin. A generation is now graduating from universities there who barely speak Tibetan. Some people have been arrested for continuing to teach in the language. In April last year Gonpo Tenzin, a singer, was sentenced to three-and-a-half years in prison for his album, “No New Year for Tibet”, encouraging Tibetans to preserve their language and culture.

In some areas outside the TAR, however, the government is less hostile to Tibetan. Since the early 2000s, in much of Qinghai, the number of secondary schools that teach in Tibetan has risen, according to research there by Adrian Zenz of the European School of Culture and Theology at Korntal, Germany. The range of degrees taught in Tibetan has expanded too. Unlike elsewhere, someone who has studied mainly in Tibetan can still get a good job in Qinghai. A third of all government roles advertised there between 2011 and 2015 required the language. Despite this, many parents and students chose to be taught in Mandarin anyway, Mr. Zenz found. They thought it would improve job prospects.

But work can be difficult to get, despite years of huge government aid that has helped to boost growth. Government subsidies for the TAR amounted to 111% of GDP in 2014 (see chart), according to Andrew Fischer of Erasmus University Rotterdam. Eleven airports serve Qinghai and the TAR—they will have three more by 2020. A 156-mile train line from Lhasa (population 560,000) to Shigatse (population 120,000), which was completed in 2014, cost 13.3 billion yuan ($2.16 billion). A second track to Lhasa is being laid from Sichuan, priced at 105 billion yuan.

Better infrastructure has fueled a tourism boom—domestic visitors to the TAR increased fivefold between 2007 and 2015—but most income flows to travel agents elsewhere. Tourists stay in Han-run hotels and largely eat in non-Tibetan restaurants (KFC opened its first Lhasa branch in March). Tibetan resentment at exclusion from tourism- and construction-related jobs was a big cause of rioting in Lhasa in 2008 that sparked plateau-wide protests. Other big money-spinners—hydropower and the extraction of minerals and timber—are controlled by state-owned firms that employ relatively few Tibetans. The Chinese name for Tibet, Xizang, means “western treasure house”. But Tibetans have little share in its spoils. The rehousing of nomads has helped provide some with building jobs, but has also brought suffering: those relocated sometimes find it harder to make a living from herding.

In most other parts of China, villages have been rapidly emptying as people flock to work in cities. In the country as a whole, the agricultural population dropped from 65% to 48% as a share of the total between 2000 and 2010. On the plateau it fell only slightly, from 87% to 83%. It is hard for Tibetans to migrate to places where there are more opportunities. Police and employers treat them as potential troublemakers. In 2010 only about 1% of Tibetans had settled outside the plateau, says Ma Rong of Peking University. They cannot move abroad either. In 2012 Tibetans in the TAR had to surrender their passports (to prevent them joining the Dalai Lama); in parts of Qinghai officials went house-to-house confiscating them.

For university graduates, the prospects are somewhat better. There are few prospects for secure work in private firms on the plateau. But to help them, the government has been on a hiring spree since 2011. Almost all educated Tibetans now work for the state. A government job is a pretty good one: salaries have been rising fast. Few Tibetans see such work as traitorous to their cause or culture. But the government may not be able to keep providing enough jobs for graduates, especially if a slowdown in China’s economy, which is crimping demand for commodities, has a knock-on effect on the plateau.

Many of the problems faced by Tibetans are common in traditional pastoral cultures as they modernize. But those of Tibetans are compounded by repression. They are only likely to increase when the Dalai Lama, now 81, dies. The central government will try to rig the selection of his successor, and no doubt persecute Tibetans who publicly object.

In private, officials say they are playing a waiting game: they expect the “Tibetan problem” to be more easily solved when he is gone. They are deluding themselves. They ignore his impact as a voice of moderation: he does not demand outright independence and he condemns violence. Tibetan culture may be under duress, but adoration of the Dalai Lama shows no sign of diminishing. Poverty, alienation and the loss of a beloved figurehead may prove an incendiary cocktail.