1. Surrender Agreement signed in Dhaka on December 16, 1971 leading to creation of independent nation of Bangladesh,

I kept silent about my participation in Operation Eagle, Bangladesh Ops for a very long time and none of you heard that word from me until 2010 when I started my demand for gallantry award after His Holiness the Dalai Lama’s visit to Ann Arbor, Michigan on March 03/04, 2008. I did not invite him to visit Ann Arbor, and I had no time to meet him. I read news media coverage, particularly the story published by The Ann Arbor News of this event. Prior to this date, I did not speak or write about him. I realized that the time has come to describe my Tibet Connection. If I had really cared about getting Gallantry Award, I would have reacted in January 1972 when my Unit Commander informed blaming Army Medical Directorate for not forwarding my citation on time to Army Headquarters, MS Branch. The citation was not lost. It was not sent in time for its consideration. I raised the issue in 2010, for it is important to disclose my Tibet Connection.

I want to receive Gallantry Award recommended in 1971 War. However, it is not acknowledgment of my service in Indian Army. The award was recommended by my Unit Commander who knew that I deliberately chose to enter Enemy territory without carrying my personal weapon. Under Army Act, the refusal to carry personal weapon, the concealing or disposal of personal weapon, or not using weapon against Enemy is punishable offense. My Unit ( Establishment No.22 – Special Frontier Force) is not subject to Army Act. They have not threatened to discipline me. Rather, they have shown appreciation for my determination to work without personal weapon. I could make that decision because of my Tibet Connection.

While most of you may have seen or read about speeches or quotes from speeches given by the Dalai Lama, may not be knowing about an assurance the Dalai Lama has given to his followers. Dalai Lama lives on the hope that China’s Communist Regime would experience sudden downfall. Many in the Tibetan Exile community share this hope as they believe or have faith in his words. I acknowledge my Tibet Connection, but I am not follower of the Dalai Lama. So, I had to investigate his statement and subject it to my rational analysis, a scientific method which I call Devotional Inquiry. I use the term Devotion not in the context of any kind of worship service or prayerful thought. I don’t look inwards. I look for answers examining the reality of external world.

For example, many Christians believe in the Second Coming of Christ. This hope comes from The New Testament Book of Revelation. Over 2,000 years have passed, many believers lived and died and yet the prophecy has not come true. I looked at various possibilities to account for Dalai Lama’s hope for the sudden, unexpected downfall of China. He has not shared or further explained the mechanism for China’s downfall. World War II came to an abrupt stop when US bombed Hiroshima and Nagasaki. Japan surrendered in August 1945. I ruled out the possibility of China surrendering in World War III. Regimes have changed after public revolts like American Revolution, French Revolution, Red Revolution, and October Revolution of China. In fact, Tibet formally declared Full Independence on February 13, 1913 after downfall of Manchu China following 1911 Revolution. We have seen some protests in China during 1989, protests in Hong Kong, and signs of severe labor unrest in China. But, I am not expecting a Great Proletarian Revolution to cause China’s downfall. If not political unrest, I considered the possibility of economic meltdown and severe or Great Depression. It is a good possibility as their Communist – Capitalist Economy will fail and is currently failing.

Historically, we have records of great empires rising and falling. People have given variety of reasons to account for rise and fall of empires. Diseases like Malaria may account for fall of Roman Empire. Apart from health and sickness, people have cultural beliefs. Jews may believe in Messiah, Christians believe in Kingdom of Heaven, Buddhists believe in Reincarnation of Compassionate Buddha ( Maitreya), and Hindus may believe in Reincarnation of Lord Vishnu to change World Order to restore Peace and Justice.

Being student of Biology, I looked at Natural Causes and Natural Mechanisms that can significantly impact life on Earth. Natural calamities like floods, earthquakes, and cyclones can have devastating effect. But, most major and minor mass extinction events have extraterrestrial causes such as Radiation or impact or collision by celestial objects like comets or asteroids. Planet Earth experienced several such collision events. At K-T Junction, about 65 million years ago, the entire Dinosaur population got wiped out while Life on Earth continued to multiply. In most recent times, during Geological Epoch called Holocene, entire species of Hominin Family got wiped out with exception of Anatomically Modern Man leaving no surviving prehistoric man such as Neanderthal, Denisova, or Cro-Magnon. But, in terms of Science, these are all random, unguided events that can be interpreted as accidents and are not purposeful actions.

I account for human life as series of guided, goal-oriented, sequential, purposeful actions which demand synchronization with events in external environment such as periods of light and darkness, and Conservation of Mass, Energy, and Momentum. While planet Earth is spinning at great speed and is moving all the time, I sleep and get up in Ann Arbor as if Earth is a stationary object. I am not predicting random, spontaneous event or natural calamity that may cause sudden downfall of China.

I looked at Book of Revelation written by Prophet John who most Christian theologians think of as Apostle John, one of Jesus Christ’s Twelve Disciples. Apparently, he wrote this Book while imprisoned in a small island far away from Babylonia. But, that is not important. Historical Babylonian Empire had fallen several centuries before birth of Jesus Christ. There was no Evil Babylonia when John wrote his Revelation Prophecy. Babylonia is thought of a ‘code’ name for some unknown Evil Empire. Some think, that the term ‘Evil Empire’ or ‘Babylonia’ may refer to Rome or even China in the East which was not a great empire at the time of writing that Book.

Chapter 18, Book of Revelation, that describes sudden downfall of Babylonia was inspired by The Old Testament Book of Isaiah, a Hebrew Prophet. His prophecy came true when Persian Emperor Cyrus defeated and vanquished Babylonia and graciously permitted rebuilding of Second Temple in Jerusalem long before the birth of Jesus Christ. So John has no reason to make prophecy about Babylonia while he lived during the lifetime of Jesus and His Crucifixion.

I accept the scenario described in Chapter 18, Book of Revelation. I am not claiming new prophetic vision. I am simply unsealing the mystery of Babylonia. When I state, “Beijing is Doomed,” I am not visualizing natural accident or natural calamity. China’s downfall will come by guided, goal-oriented, purposeful, sequential actions following its strike by heavenly object such as asteroid, large stone which will collide with China’s largest City of Shanghai.

TE3N is a suspense thriller set in Kolkata. Industry’s best actors Amitabh Bachchan, Vidya Balan and Nawazuddin Siddiqui coming together in one film.

It’s been 8 years since John Biswas (Amitabh Bachchan) lost his granddaughter, Angela, in a tragic kidnapping incident that scarred him & his wife Nancy forever. But eight years later, while the world has moved, John hasn’t given up his relentless quest for justice.

He continues to visit the police station where he’s shunned & ignored every day. The only person whose help he seeks is Martin Das (Nawazuddin Siddiqui), an ex-cop turned priest who has one thing in common with John – the death of Angela had a life altering impact on both men.

But then, 1 day, 8 years after that tragic incident, there’s another kidnapping & everything about it echoes of similarity with the kidnapping of Angela. Father Martin is once again dragged into the investigation by cop Sarita Sarkar (Vidya Balan). 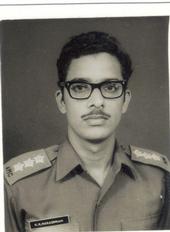 It comes as a big surprise to find my stolen Indian Army Photo ID image from 1972 is revealed in a brief screenshot of this Movie.

I use my Indian Army Photo ID image of 1972 to describe my connection with City of Doom Dooma, in Tinsukia District of Assam, India. I unsealed the prophecy shared by Book of Revelation, Chapter 18 that gives detailed account of sudden, unexpected, downfall of Evil Empire in one single day.

My Indian Army Photo ID image taken in 1972 at Doom Dooma serves just one purpose; it unseals Revelation Prophecy and it helps me to announce, “BEIJING IS DOOMED.”