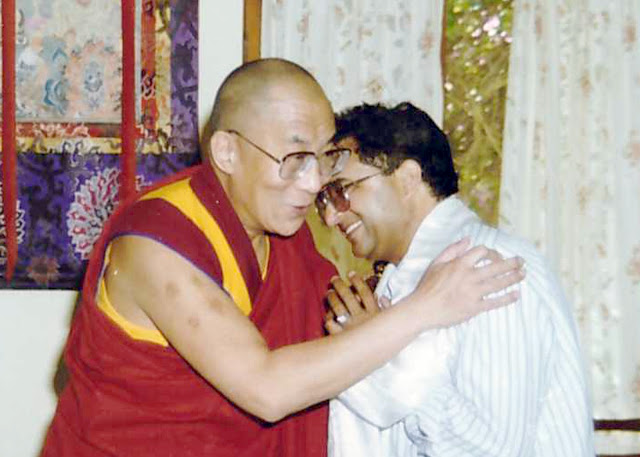 New Delhi: ‘Thank you Dalai Lama’ the world’s biggest photo festival is being presented at All India Fine Arts & Crafts Society (AIFACS). The festival that started last week will go on till 15th April, 2016 is based on internationally acclaimed Indian photo journalist Vijay Kranti’s pictorial work of the past four decades. Presented in all the four galleries of AIFACS, this show is the largest ever photo-exhibition on Dalai Lama and Tibetan Civilization till date.

This event is a sumptuous treat to the eyes and soul for those who love PHOTOGRAPHY, DALAI LAMA and BUDDHISM. For a special treat to the art lovers, a live demonstration of most exotic spiritual fine arts of Tibet is going on during the festival. These art pieces are demonstrated by reputed Tibetan artists of- THANGKA PAINTING, SAND MANDALA PAINTING and BUTTER SCULPTURE.

“This photo-festival is an Indian photographer’s artistic tribute to the success story of a peaceful and brave refugee community, its monk leader the Dalai Lama and their magnanimous hosts — the people and Government of India”, says Vijay Kranti.

This exhibition is the concluding show of Vijay’s five year long photo-festival titled “BUDDHA’s HOME COMING” which started in March 2011 at Barcelona in Spain. Other shows in this series included one at India International Centre, New Delhi during the “Ceremony of Bodhi Awakening” in March 2012, one at the Museum of Fine Arts of Panjab University, Chandigarh in April 2013 and the last one in Sydney, Australia in June 2014.

Vijay Kranti also added “It’s a humble acknowledgement on behalf of Indian citizens that HH Dalai Lama and Tibetan refugee community have made very creative use of Indian hospitality. The benevolent presence of HH Dalai Lama in India as our honoured guest since 1959 has enriched India’s spiritual, social and cultural life enormously in so many ways”.

About 300 photo exhibits along with slide shows based on over 500 images present an intimate photo-study of Dalai Lama, Tibetan culture and Tibetan refugee community in this photo festival.

“Dalai Lama is considered as the reincarnation of Lord Buddha. His coming and adopting India as his second home has proved a blessing in disguise for India. Looking at the enormous contributions he has made to India’s spiritual and cultural life, I look at his presence in India as the second home coming of Buddha after a long gap of over 2500 years,” says Vijay Kranti.

A senior Indian journalist, an accomplished photographer and an acclaimed Tibetologist, Vijay Kranti started his professional interaction with the Tibetan community and its leader, His Holiness the Dalai Lama, on a newspaper assignment in 1972. Since then he has been writing frequently on various aspects of Tibet and has extensively photographed the cultural and social life of the Tibetan community. His coffee table book “Dalai Lama – The Nobel Peace Laureate Speaks” which is based on photography and personal interviews with Dalai Lama, stands out as the only book of its kind in the international market. His latest comic book “Dalai Lama – The Soldier of Peace”, published in English, Tibetan and Hindi has also been quite popular too.

Over past four decades Vijay Kranti has evolved an impressive photo-archive on various aspects of Tibetan life. This collection is acknowledged as the largest and aesthetically rich photo-documentation of Tibetan life and culture across the globe. Mr. Kranti has been frequently invited to many countries including Austria, Germany, Switzerland, Holland, the USA, UK, Canada, Spain and Australia to present his photo-exhibitions and photo based talk shows on Tibet.

This photo-festival is curated by a well known fashion photographer Akshat Kranti Mahajan.

BACKGROUND: In 1959 a handful of Tibetan refugees (just 80,000) followed their deposed monk ruler and spiritual leader the Dalai Lama into India. They arrived in a hopeless shape — no physical assets, no international language skills, no knowledge about the functioning of modern world politics or business. Simply nothing to shake hands with the strange new world…….

While Indian Prime Minister (Late) Pandit Jawahar Lal Nehru ensured rehabilitation and a favorable and free environment to the refugees, many friendly international organizations came forward with financial, material and moral support to help them handle their trauma. Encouraged by this support, the Dalai Lama persuaded the exiled community to start a process of national reconstruction around whatever manpower and talent was available. 57 years later today, India has emerged as the largest reservoir of authentic Tibetan culture and Tibetan identity in the world. Vijay Kranti has been closely watching and documenting this rebirth of Tibetan civilization since 1972.

This photo-festival is an Indian photographer’s visual tribute to the success story of this brave and peaceful refugee community, its monk leader the Dalai Lama and their magnanimous hosts — the people and government of India.