Red China openly confessed its sense of deep fear about Western Democratic Ideals. In her view, Internet poses a grave challenge to her one-party governance inspired by Communist ideology. This fear of Democracy, Freedom, and Individual Liberties shaped the split between Red China and Soviet Union during late 1950s.

Nikita Sergeyevich Khrushchev(April 17, 1894 – September 11, 1971), leader of the USSR from 1956(Premier from 1958) to 1964 traveled to United States in 1959 and 1960. His insistence on “peaceful coexistence” with the West contributed to a rupture with Communist government of Red China. Khrushchev stopped assisting Chinese nuclear program on June 20, 1959. Red China’s Chairman Mao Tse-Tung criticized Khrushchev as a “palm-singing buffoon who underestimated the nature of Western Imperialism.”

Khrushchev agreed for the first Nuclear Test-Ban Treaty of 1963. The Moscow Agreement banned testing nuclear weapons in the atmosphere, in outer space, and under water. It paved the way to 1968 Nuclear Non-Proliferation Treaty or The Limited Test-Ban Treaty that tried to restrict the size of the “Nuclear Club.” Khrushchev further eased relations with the West by agreeing to limit central strategic forces. Strategic Arms Limitation Talks(SALT) began in 1969 and SALT I Treaty was signed in May 1972. Two arms-control agreements were made, 1. The Anti-Ballistic Missile(ABM) Treaty that agreed to limit antiballistic missiles, and 2. Interim Agreement on Offensive Nuclear Weapons that imposed freeze on long-range land- and sea-based ballistic missile launchers. Soviet Union did not violate provisions of these treaties.

Nixon-Kissinger US administration in 1972 took advantage of the split between Soviet Union and Red China to formulate US foreign policy that initiated trade and commerce relations with Red China. Nixon-Kissinger had clearly underestimated the nature of Red China’s Imperialism and failed to recognize threats posed to Peace and Freedom by Red China’s Policy of Expansionism.

The rupture between Soviet Union and Red China initiated by Premier Khrushchev in 1959 is in the interests of promoting Western Values of Democracy, Freedom, and Peace. The current US foreign policy of containing and isolating Russia is driving Russia to seek healing of rupture of 1959 and is forcing Russia to rebuild broken relations with Red China. 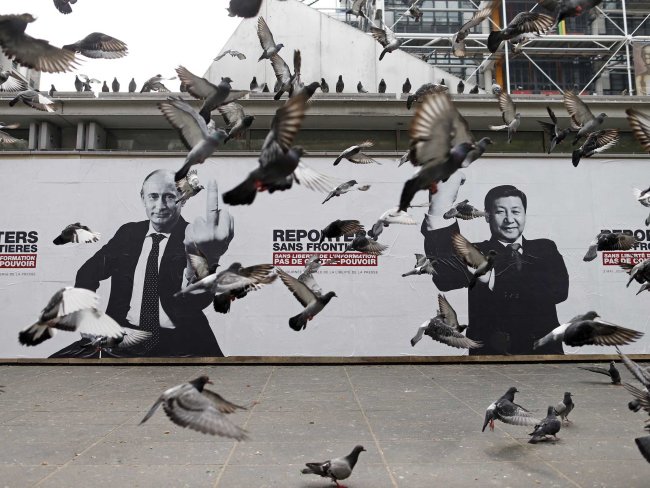 (Reuters) A poster depicting Russian President Vladimir Putin and his Chinese counterpart Xi Jinping pasted on the Brancusi Atelier by activists from Reporters Without Borders to mark the 20th annual World Press Freedom day in Paris in 2013.

President Xi Jinping wants his people to know that the greatest threat to China is an insidious export from the West — ideas that could lead to a color revolution.
“The one non-neglectable factor [in the development of] color revolutions in these countries is the spreading of Western ideology, especially from the US,” Xu Songwen of the Chinese Academy of Social Sciences wrote Sunday in The People’s Daily(via The South China Morning Post).

The People’s Daily is a Chinese Communist Party paper known to reflect the sentiments of Jinping’s regime.
Songwen wasn’t alone either. In the same issue, four other academics also shared their thoughts on the dangers of color revolutions. The message was clear. There will be no nonviolent political movements in China. There will be no regime change. This will not be Lebanon or Ukraine in 2005. This will not be the Middle East in 2011.

Don’t even think about it.

That’s where the danger is, after all — in the thinking.

China has been systematically shutting out Western ideals from research centers, school curriculums, and higher learning for some time now, but this is the first time a government mouthpiece has made it clear that these thoughts are an intentional aggression from the West.

The basic gist of all of the papers in Sunday’s People’s Daily is fairly simple. It’s like this: The proliferation of Western democratic ideals are a Cold War tactic that helped bring about the end of the Soviet Union.

The ideas bring unrest and discontent to populations and ultimately lead to bloodshed. They also tend to end in failure (see: Arab Spring). Those who foment this kind of unrest are enemies of the state.

There is “a high price to pay for nations that fall into the trap of color revolutions,” one article said, according to the South China Morning Post.
Besides, a People’s Daily commentary that ran Friday said, the Chinese Communist Party is “rigid enough to protect against threats, and resilient against internal problems and external shocks.”

So don’t even try it. 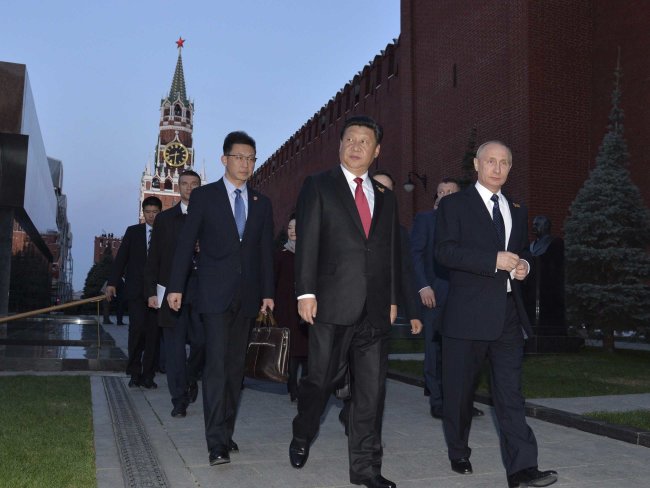 (Reuters) Putin and Xi arriving for a festive concert marking the 70th anniversary of the end of World War II in Europe, at Red Square in Moscow on May 9, 2015.

China is taking a play right out of Russia’s book with this one. In March, Security Council of Russia railed against the US security strategy, writing: “In relation to Russia, there is a high probability of the US using extensively advanced means for ‘color revolutions’ to eliminate unwanted political regimes.”

So where do color revolutions start?

Aside from schools and research centers, they start on the internet. The People’s Liberation Army knows that all too well, having released a chilling memo last month that said “the internet has become the main battlefront for struggle in the ideological area.”

Western hostile forces and a small number of “ideological traitors” in our country use the network, and relying on computers, mobile phones and other such information terminals, maliciously attack our Party, blacken the leaders who founded the New China, vilify our heroes, and arouse mistaken thinking trends of historical nihilism, with the ultimate goal of using “universal values” to mislead us, using “constitutional democracy” to throw us into turmoil, use “color revolutions” to overthrow us, use negative public opinion and rumours to oppose us, and use “de-partification and depoliticization of the military” to upset us.

Hours after these papers appeared in The People’s Daily, Hong Kong authorities said they had taken nine people into custody for potentially attempting to plan an attack on a legislative building on the island. Officials think they may advocate “localism,” or the belief that the mainland should stay out of Hong Kong affairs, according to The New York Times.