At Special Frontier Force, I host ‘The Living Tibetan Spirits’. I am sharing a news story on Kentucky Monk and influential author Thomas Merton who is described by His Holiness the 14th Dalai Lama as a special friend, and spiritual brother of Tibet.

Louisville filmmaker got an interview with the Dalai Lama
As film came out, Pope Francis praised Merton to Congress
KET will air documentary about the monk and writer Dec. 10-15

Thomas Merton, the Kentucky monk and influential author, met in 1968 with the Dalai Lama in Asia during the final weeks of his life. Louisville filmmaker Morgan Atkinson’s new film about Merton’s pivotal last year will debut on KET on Dec. 10. Photo used with permission of the Thomas Merton Center, Bellarmine University.

Merton, the Trappist monk and acclaimed writer who for 27 years lived at the Abbey of Gethsemani in Nelson County, spent his last weeks in 1968 traveling through Asia to meet and have dialogue with leaders of other religions.

Perhaps the most eventful of those meetings was with the spiritual leader of Tibetan Buddhists, then a young man of 33.

When the Dalai Lama visited Louisville two years ago, Atkinson was hired to produce a short film for the people who hosted him. With their help — and after a U.S. State Department background check — Atkinson and his video camera were promised a brief audience.

He remains a source of spiritual inspiration.

“What was supposed to be a five-minute visit became 15 or 20 minutes,” Atkinson said. “He was just delighted. The meeting with Thomas Merton had taken place 45 years ago, but you could tell that it had been really meaningful to him.”

Atkinson’s new film, The Many Stories and Last Days of Thomas Merton, includes an engaging interview with His Holiness.

“I myself consider him a close friend, a most special friend, a spiritual brother,” the Dalai Lama told Atkinson, who gave him an old photograph from their meeting.
“This looks like I’m his son,” the Dalai Lama said with a laugh, before turning serious. “I think spiritually he is elder. So, I am younger.”

That interview is one of many highlights in the excellent hour-long film, which will air on KE T eight times from Dec. 10-15. Atkinson wrote and produced the documentary, which is narrated by poet Nikky Finney.

Atkinson had made a successful PBS documentary, Soul Searching: The Journey of Thomas Merton, in 2006. But for the centennial of Merton’s birth this year, he thought there was more to say about Merton’s contributions to inter-faith dialogue and understanding. And he wasn’t alone.

In his speech to Congress in September, Pope Francis cited Merton as one of four Americans who inspire him. (The others are Abraham Lincoln, the Rev. Martin Luther King Jr. and Catholic social activist Dorothy Day.)

“He remains a source of spiritual inspiration and a guide for many people,” the pope said of Merton. “He was also a man of dialogue, a promoter of peace between peoples and religions.”

The pope’s comments came as Atkinson was on a West Coast tour with his just-finished film. “If I had asked for a press agent,” he said, “I couldn’t have had a better one.”

Merton was born in France to an American mother and a New Zealand father. After earning English degrees at Columbia University, he became a Catholic at age 23. He went to a retreat at Gethsemani in 1941 and, eight months later, asked to join the order.

As a monk, he wrote more than 70 books of poetry and essays about spirituality, pacifism and social justice. His 1948 autobiography, The Seven Storey Mountain, became a best-seller and made Merton an unlikely celebrity. He also attracted a following in the 1960s with his advocacy for civil rights and stance against war.

You could tell that it had been really meaningful to him.

Merton’s fame led him to correspond with leaders from many religions, and he longed to meet them. But it was only when a new abbot took over Gethsemani that Merton was finally given permission to travel. While on that trip to Asia, he was accidentally electrocuted in his Bangkok hotel room by a defective fan on Dec. 10, 1968.

The pope’s praise for Merton was notable, because some Catholic leaders have often tried to minimize him.

“Merton was seen by some as too liberal, or too open to dialogue with other faith traditions,” Atkinson said. “To have Pope Francis sort of push him up as an exemplar of a good spiritual path is really a good thing.”

Atkinson was raised Presbyterian, but he said he has been intrigued by Merton since he first read his books three decades ago. He thinks Merton remains popular because people are attracted to different aspects of his life and work.

“There are just so many dimensions of him that people can relate to,” he said. “He wasn’t your traditional holy man, by any sense. Here was a man who found meaning, and you think, well, maybe I can find meaning, too.” 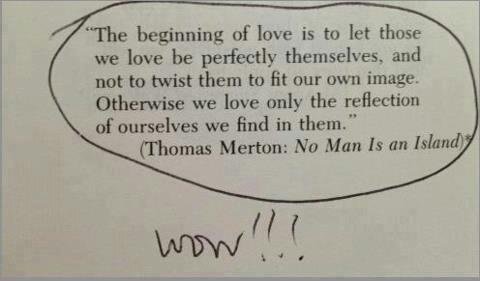