I identify myself as host of ‘The Living Tibetan Spirits’. His Holiness the Dalai Lama arrived in India almost sixty years ago. I count the days of my life-in-exile since January 10, 1984. I live as a refugee in the United States without applying for asylum or refugee status. Many Tibetan refugees may understand my claims about life-in-exile for it is not a personal choice. It’s a choice imposed upon us.

AS DALAI LAMA EVENT IS SHIFTED FROM DELHI, MODI’S LINE ON TIBET REMAINS A PUZZLE – THE WIRE

The MEA says India’s position on the Dalai Lama is the same but the fact that a circular was issued advising officials to keep their distance suggests a change had occurred which is now being corrected.

The Dalai Lama waves as he leaves after speaking on “Embracing the Beauty of Diversity in our World” to thousands at the UC San Diego campus in San Diego, California, US, June 16, 2017. Credit: Reuters/ Mike Blake/Files

New Delhi: Days after newspaper reports of a top official directing all government functionaries to avoid events commemorating 60 years of the Dalai Lama’s exile in India, the Tibetan ‘government in exile’ has decided to shift major programmes slotted for Delhi on March 31 April 1 to Dharamsala in Himachal Pradesh.

While officials from the Central Tibet Administration (CTA) – the NGO that the exiles run – denied receiving any instructions from the Indian government, China-watchers in Delhi say they are puzzled by the underlying message the Modi government is sending with its new circular, given how it had earlier projected a willingness to play the ‘Tibet card’.

The Indian Express reported on March 4 that Cabinet Secretary P.K. Sinha had issued a classified circular “discouraging” government functionaries – political and bureaucratic –  from attending events organised by the Tibetan government-in-exile to mark the key anniversary over the next few months.

The circular was apparently issued to central ministries and state governments on the urging of the new foreign secretary, Vijay Gokhale. The letter from Gokhale to Sinha was dated February 22, as per the newspaper. A day later, Gokhale travelled to Beijing on his first visit to China as foreign secretary.

The Ministry of External Affairs responded to reporters queries on the Indian Express report by stating that India has not changed its position on the Dalai Lama. Describing him as a “revered religious leader” who is “deeply respected” by Indians, the MEA added that the Dalai Lama is “accorded all freedom to carry out his religious activities in India”.

Speaking to The Wire, Dhardon Sharling, information secretary, CTA, did not want to comment on the circular “since this was not officially communicated to us”.

She added that there had been a change in plans for the main ‘Thank you India’ event. “It is true that the ‘thank you India’ public event is rescheduled and will take place on March 31 – the 60th year since his Holiness stepped on the Indian soil and the venue is shifted from Delhi to Dharamshala,” Sharling said.

While the March 31 inter-faith meeting of Raj Ghat had been cancelled, the main event was to be held in Delhi on April 1, which has now been shifted a day earlier to Dharamshala.

Sharling said that the events were planned throughout the year “to publicly express our gratitude to the government and people of India”.

“India has been our second home for six decades,” she added.

When asked about the cause behind the change in plans, she said, “I cannot cite the key reason behind but we are following directives from our leadership to hold the event in Dharamshala instead”.

The CTA Sangay is in Delhi on an “official visit” this week, during which he will meet with “officials and dignitaries”.

According to some sources, similar circulars have been sent out in previous years as periodic reminders to government officials to keep their distance.

However, according to another former Indian diplomat, it was a “little surprising” that a formal circular was issued. “Government does at times discourage people from attending a meeting, but this was a pre-emptive move…and done on a formal circular,” he said.

Former director of the Institute of Chinese studies Alka Acharya also wondered if these notes were a normal routine. “It would not be surprising if such notes were sent around by the MEA from time to time in the past as well, possibly on the eve of state visits or when some very high-profile functions were organised,” she said.

The Cabinet Secretary’s circular gave the reasoning that the Dalai Lama’s upcoming commemorative events would be held at a “very sensitive time in the context of India’s relations with China”.

Prime Minister Narendra Modi is scheduled to attend the SCO summit in June. The Times of India reported that there are important bilateral meets planned ahead of that high-level visit by Modi.

India-based French expert on Sino-India ties and Tibet, Claude Arpi, described himself as “sad” at the issuing of the circular, adding that “sensitive time means nothing”. “Times have been ‘sensitive’ since the Dalai Lama crossed the border at Khenzimane on March 31, 1959. It will remain ‘sensitive’,” asserted Arpi.

China has frequently raised the issue of presence of Tibetan refugees and activities of Dalai Lama with the Indian government. The default Indian position has always been that India is a “open society” and there are not many restrictions on freedom of expression, including for refugees.

“It is a sensitive issue that has always been managed. The Dalai Lama has been meeting senior government functionaries. A complete restriction on him is something we have never accepted,” said the former Indian diplomat.

In fact, he pointed out that the circular could give the impression to the Chinese that the government has more leverage on the activities of the Tibetan exiles. “It raises expectations,” he said.

Arpi agreed that China will also ‘note’ that India agreed “to their demand and ask more”. “It will not help India in the long run,” he argued, adding, “…if the time was really sensitive, one or two ministers could be told not to meet HHDL (His Holiness Dalai Lama). Why a circular? [This is] uncalled for.”

He asked whether China would have been ‘nicer’ and supported Indian aspirations at the UN Security council if India had capitulated at Doklam. “The answer is No”.

When asked if he thought that it was justified for India to be circumspect at this moment, Karnad said, “Not in the least. If anything, Xi’s assumption of dictatorial powers is the time to stand up to China, not display what in my books I have called “bovine pacifism” where big powerful states are concerned”

The CTA president Lobsang Sangay had announced in January that the 60 years anniversary would be marked by year-long events, with the highlight being a public gathering at New Delhi’s Thyagaraj sports complex on April 1.

Termed the ‘Thank you India’ campaign, Sangay had said at the launch that the April 1 event “will feature public addresses by Indian dignitaries and Tibetan cultural performances and is expected to draw over 5000 people”.

Acharya pointed out that there had seemed to be a “rethinking” in official circles, “and most certainly a hardening of views on the Tibetan issue, within the strategic community”.

She was referring to the earlier playing up of the so-called ‘Tibet card’ by this government, which was to have a more visible relationship with the Tibetan leader and high-profile visits to Arunachal Pradesh. Ministers like Kiren Rijiju and Mahesh Sharma have met with the spiritual leader, though the prime minister has not yet done so.

The Dalai Lama shared the stage with Indian president in 2016 in Rashtrapati Bhawan at an event described as “non-political” after a Chinese protest. When the Dalai Lama visited Arunachal last year on his sixth visit, he was received by the chief minister and other state officials.

India had also allowed the US ambassador Richard Varma to visit Tawang for the first time. China claims the entire Indian state of Arunachal Pradesh and calls it “southern Tibet”.

The Indian government had also asserted that its steadfast response to China during the Doklam crisis was one of the reason for Chinese troops to withdraw from the confrontation site. The Chinese troops may have gone away from the eyeball-to-eyeball situation, but they continue to maintain a presence in the region.

While relations has been tense between India and China over a number of issues, there had been tactical cooperation recently between the two neighbours. Despite initial objections, China allowed Pakistan to be put on the ‘grey list’ of the Financial Action Task Force for not taking steps to stop financial transactions by terror groups like Jaish-e-Mohammed and Lashkar-e-Taiba.

Acharya believed that given that the foreign secretary’s note to the cabinet secretary went out a day before he left for Bejing, “there seems to be a prima facie case for a quid pro quo having occurred”.

However, she does not believe that this amounts to a downgrading in ties with the Central Tibetan Administration (CTA).

“…this is probably not the first time that such notes have been circulated and the government’s note orcCircular by itself does not amount to any dramatic shift or change. In fact, there have been numerous occasions in the past when the government has taken a step backwards or reconsidered its decision with regard to either hosting specific events or cancelled meetings scheduled with the Dalai Lama. Often to our discomfiture,” she said.

The cancellation of the scheduled meeting of the BJP president Amit Shah with Dalai Lama in May 2015 ahead of the prime minister’s visit to China was cited as an example.

She argued that the circular may not be a downgrading, as much as “reverting to the earlier approach of distancing the government from events and activities organised by the Dalai Lama or the CTA”.

Acharya pointed out that that as joint secretary of East Asia division, “the current Foreign Secretary had ensured that there was no government participation in the “50 Years in Exile events” organised in 2009″.

As per sources in the Tibetan government-in-exile, the events around the golden jubilee anniversary had been rather subdued. “There was no media, PR or social media then. There was a different leadership then. Things have changed a lot in ten years”.

Arpi was not convinced. “Perhaps not,” he said on the possibility of downgrading of links between the Indian government and the CTA due to the circular, adding, “JS (XP) said that nothing has changed. It remains unfortunate, but hopefully temporary”.

He added that there was “no doubt that the coming months will be hot, especially when the passes in the central and eastern sectors open”. Arpi was pointing to the possibility of more Chinese ‘incursions’ across the un-demarcated boundary.

However, Karnad noted that if this was the “first step in India’s surrendering the ‘Tibet card’ then more trouble is heading this way”. “Especially because NSA Doval has got nothing from the Chinese special representative on border talks on paper to say this is the exchange. Time and again, Chinese leaders have said something, gotten India to commit, and then backed off – but Delhi has never shown the guts to do the same,” he added. 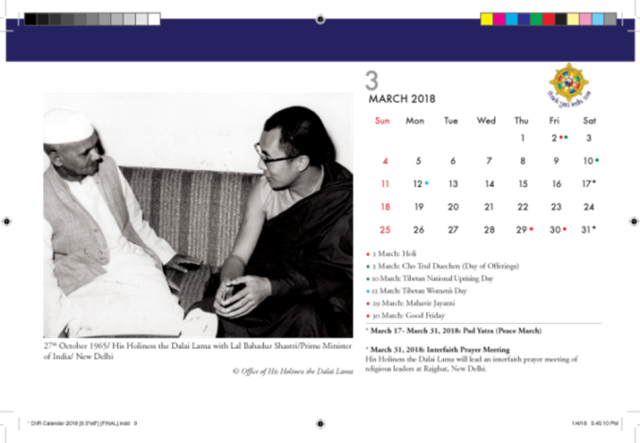 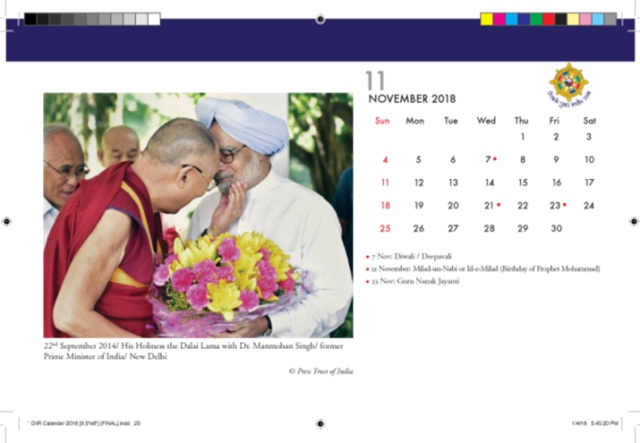