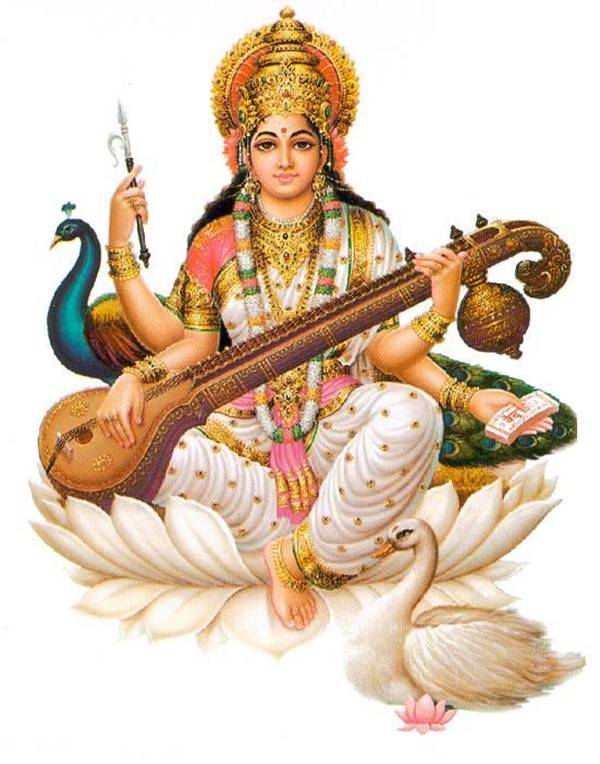 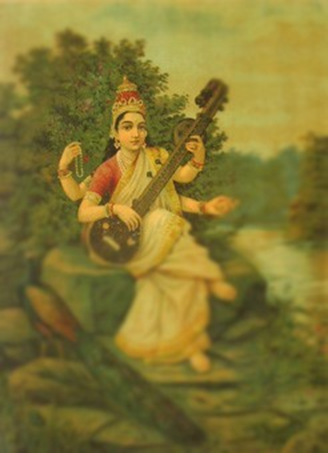 Goddess Sarasvati is known as the Goddess of Speech or Vag Devi and She symbolizes importance of Speech Etiquette and Speech Discipline.

Richard Lovelace, a romantic poet was confined within the walls of Gate House, a prison in Westminster, London. From the prison, in 1642 he wrote the poem, “To Althea, from Prison.” The poem has the following famous lines:

Stone walls do not a prison make,

Nor iron bars a cage;

That for a hermitage;

If I have freedom in my love

And in my soul, am free,

Angels alone, that soar above,

Those who had confined him could not stop him from exercising his ability to think and dream. No one can imprison or enslave the human mind. A human being essentially seeks to exist in a free state and when imprisoned, the man can still set his mind free to think and dream. A mind that is free, expresses its freedom in speech, in writing, in songs and music. Speech in all of its forms conveys the ability of a man to communicate his thoughts. Fluent and coherent speech requires the formulations of propositions, which are translated into conventional symbols, earlier acquired and readily accessible, which then reach external expression by means of an efficient vocalizing apparatus. The sequences involved in efficient speech production could be interrupted at various levels to produce different types of speech defects. 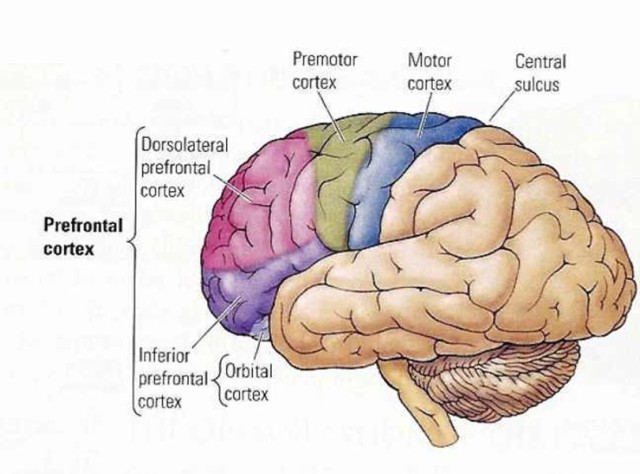 Intellectual impairment due to drugs, disease, and old age cause Speech Disorders. 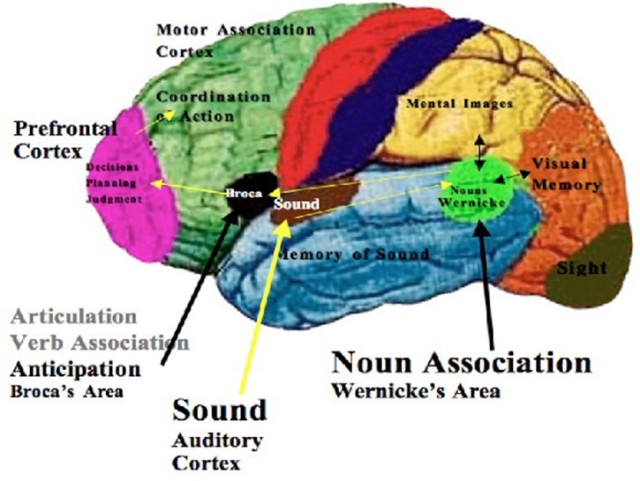 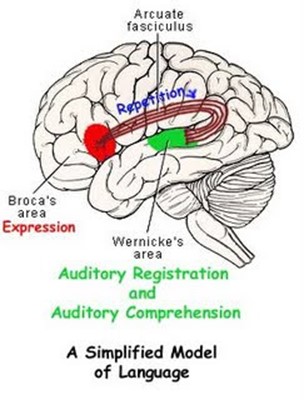 Co-ordination of sensory and motor functions is vital for normal Speech.


Since speech is an attribute of a free mind, it is important to understand the problems of disturbances of speech:

1. Intellectual impairment: Speech is deranged as a result of a deficit of intellectual function which prevents organization of meaningful propositions. A person who is intoxicated cannot speak well. There are several medical conditions associated with cognitive impairment, and the level of consciousness. Apart from these problems, a person, who is uneducated as he is unwilling to learn, cannot deliver good speech. In Sanskrit language such ignorant persons are identified as ‘MOORKHA’.

2. Dysarthria and Dysphonia: Precise enunciation of words with good volume requires normal function and co-ordination of lips, tongue, palate, and the vocal apparatus called larynx. Several medical conditions could cause a defect in motor output involved in speaking and contribute to slurring and distortion of speech.

3. Aphasias: These are speech difficulties or absence of speech where the person has no motor disorder and the articulatory system is intact. Three major varieties of aphasias are described. a. Broca’s, motor/expressive/Non-fluent aphasia: Broca’s area of brain produces verbs, builds sentences and predicts what people are going to say. Problems in this area makes the person’s speech non-fluent as the person has profound word finding difficulties. The person speaks slowly and with great effort. The speech is described as ‘telegraphic’ because it has no grammatic structure and small connecting words (e.g., and, or, but), are missing. The person comprehends well. The person can formulate thoughts in appropriate words i.e. internal speech is preserved, but is unable to translate them into corresponding sounds. b. Wernicke’s/Sensory/Receptive/fluent aphasia: Wernicke’s area of brain is involved in learning patterns corresponding to different types of auditory stimulation. It attaches meanings, images, and feelings to sounds and to individual words. Problems in this area would result in severe impairment in comprehension of language (both spoken and written). The person speaks fluently with ease and often in large amounts. However, the speech often goes in circles(circumlocutory) and contains incorrect word usages(paraphasia). The person fails to understand or carry out spoken instructions. Internal speech is disturbed and hence there is impairment of external speech. The person cannot understand what he hears. c. Conductive aphasia:  The nerve fibers between Broca’s and Wernicke’s areas are involved in this type of problem. The person has trouble converting auditory input to verbal output. It is characterized by a marked inability to repeat words or phrases spoken to the person. d. Dyslexia and Alexia:  Impairment of reading ability in individuals with normal intelligence either due to a developmental disorder or due to acquired brain lesions. 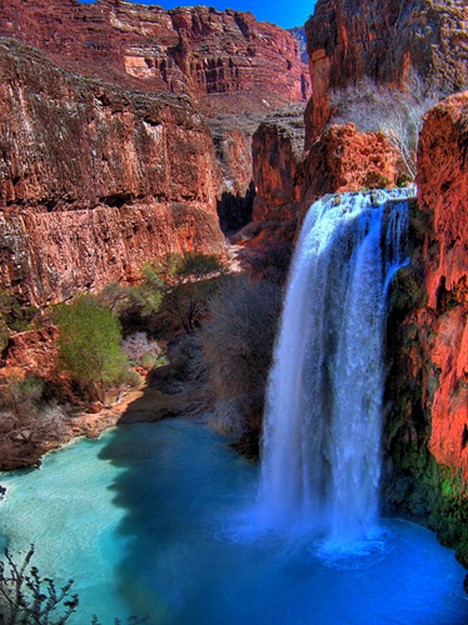 Eloquent Speech is comparable to free-flowing water, the words come out continuously without any apparent effort.

A normal healthy person with normal intelligence and abilities to speak, write, read, and sing may not automatically become a fluent speaker. Human mind needs to exist in a ‘fluid’ state to maintain and sustain a high state of alertness and activity. Mental lethargy is described in Sanskrit language as “JYAADYAA”. The mental lethargy could be due to disease (‘ROGA’), ignorance (‘MOORKHA’), or could be due to a depressed condition or state of mental activity which is described in Sanskrit language as “JADATHA”. This condition of mental weakness or diminished energy is characterized by intellectual sluggishness. The mind is dull, lazy or indifferent. Whatever term is used, mental inertia, lack of interest or energy or lassitude is an important issue, and the man’s speech lacks the fluency and the mind lacks the ‘fluidity’ that is needed for coordinating activities. Very often, man creates ‘mental barriers’, and erects ‘mental fences’ and impedes his own intellect from generating creative thoughts and in expressing such thoughts through creative forms of speech and music. There should be no obstacles to the flow of thoughts and to its physical expression. In its natural state, a river flows without any impediments and that ‘fluid’ flowing state is important for effective human communications. 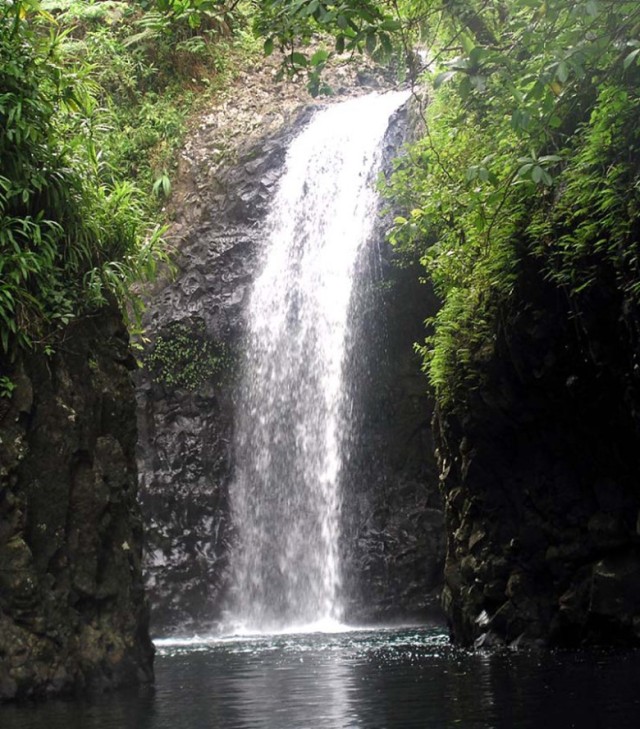 The Concept of ‘Mental Fluidity’ is very important to appreciate Eloquent Speech. Eloquence has a charming quality of its own, it is pleasing to the ears of the listeners and captivates the minds of the members of the audience. Speech should make the same impact in terms of its appeal like a scenic picture. 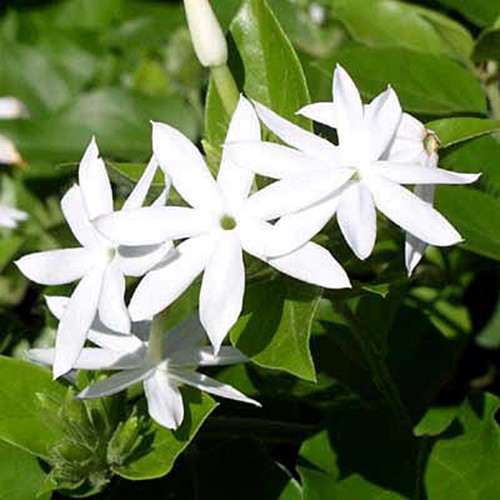 Mind if it is responding slowly, a condition of ‘mental lethargy’ described as ‘Buddhi Mandhyam’, the man cannot realize his creative potential in the field of letters, speech, arts, and music. The Vedic River of Sarasvati is personified as the patron Goddess of Speech (‘VAC or VAK’). Sarasvati enjoys a unique autonomous position and apart from man, the entire Hindu pantheon of Gods pay obeisance to Her and seek Her protection to destroy and dissolve the problem of mental lethargy which impairs mental activity. The mind of man cannot be set free unless the mental barriers and mental fences are totally eradicated and Sarasvati can flow in its natural state without impediments.

A HYMN TO WORSHIP GODDESS SARASVATI  : 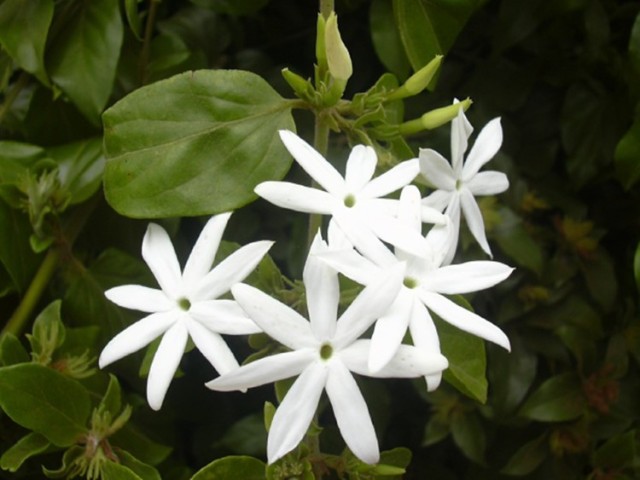 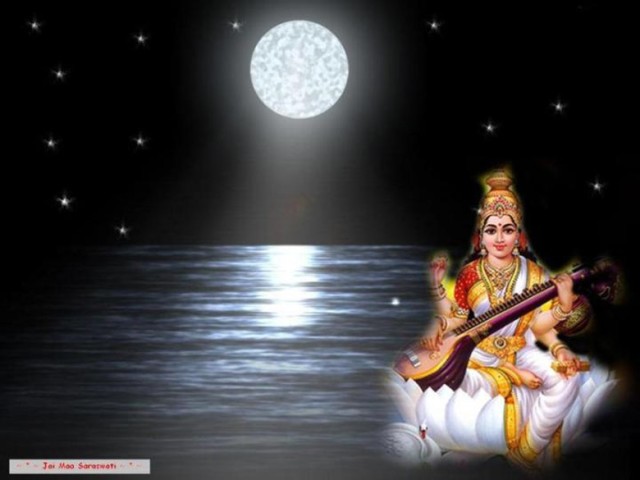 Moon, ‘INDU’ and the radiant personality of Sarasvati. 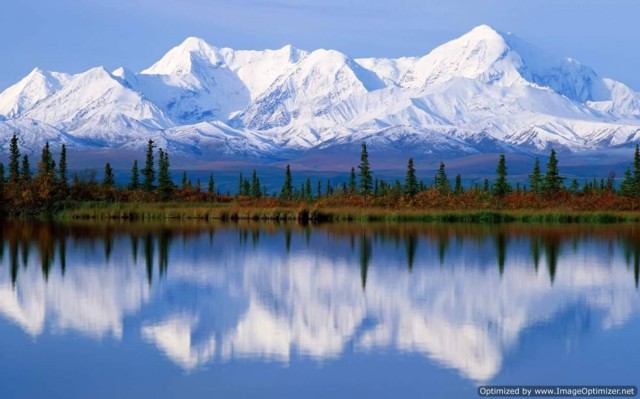 ‘TUSHAAR’, Snow clad peaks of Himalayas, the abode of Snow and Ice. 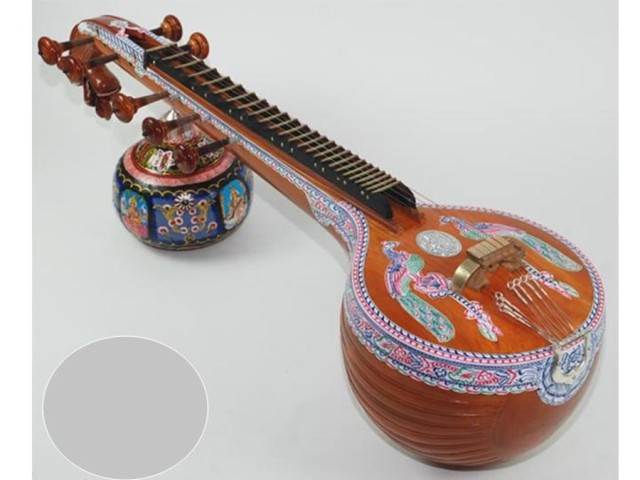 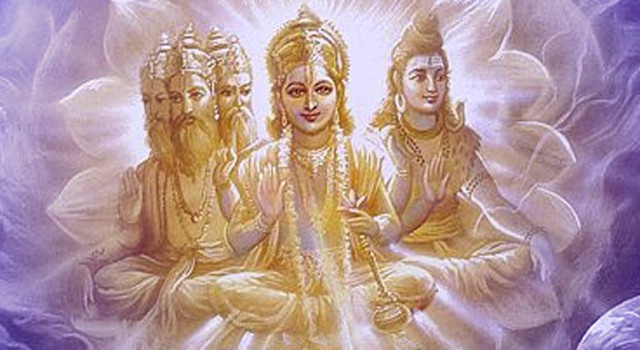 The Divine Trinity, Brahma, Vishnu, and Shiva join to worship the Goddess of Knowledge and Wisdom. 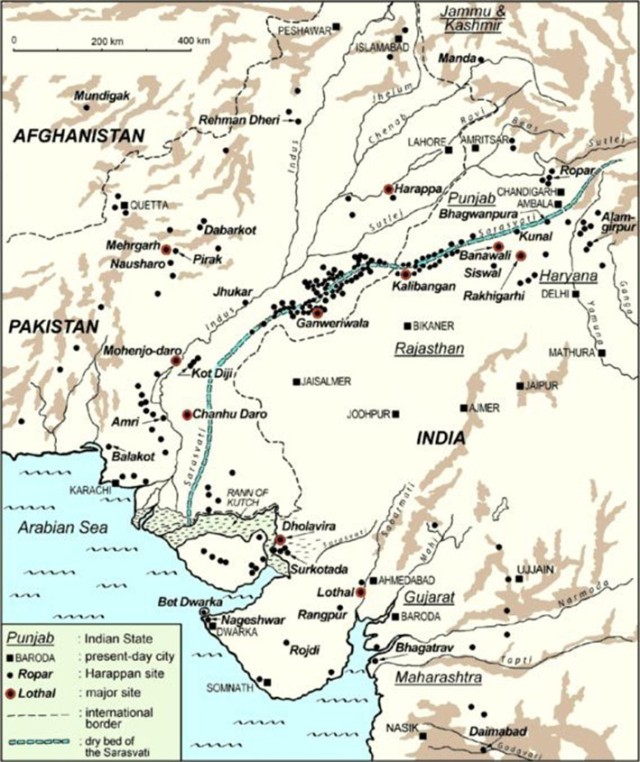 The Rig Vedic River Sarasvati, the source of pure, nourishing waters. The Sanskrit language and the Devanagari script originated here. 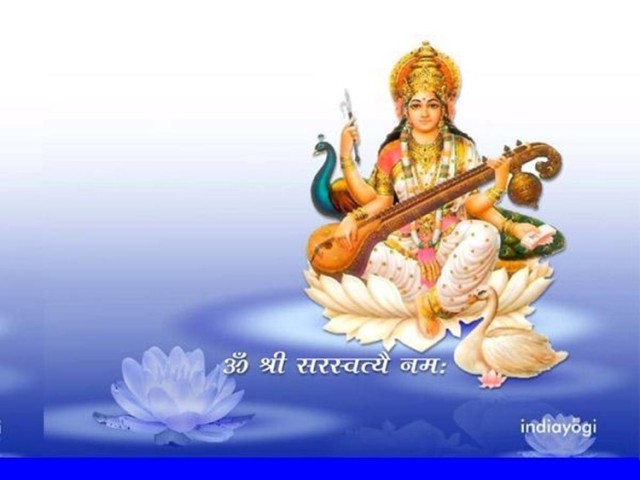 Sarasvati, the destroyer of Mental Inertia and Lethargy. 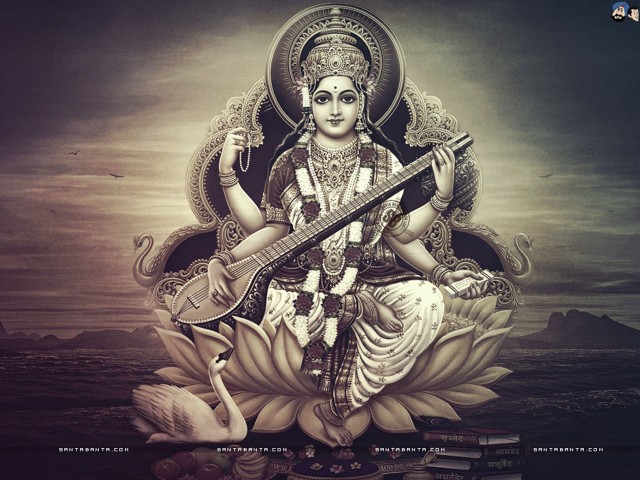 Bhagavatee, Facilitator of man’s journey from Reality to Ultimate Reality. 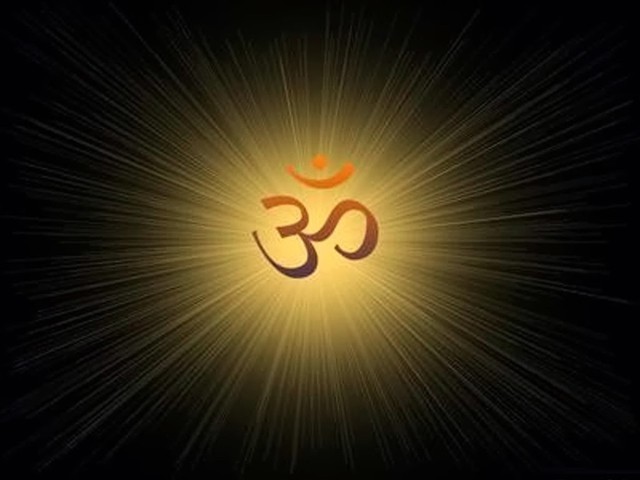 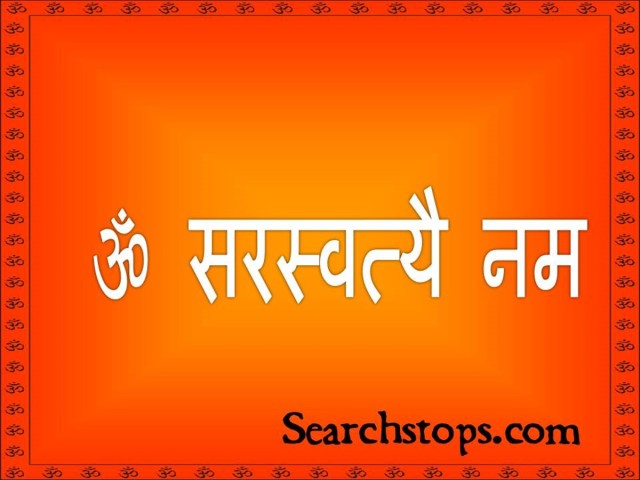 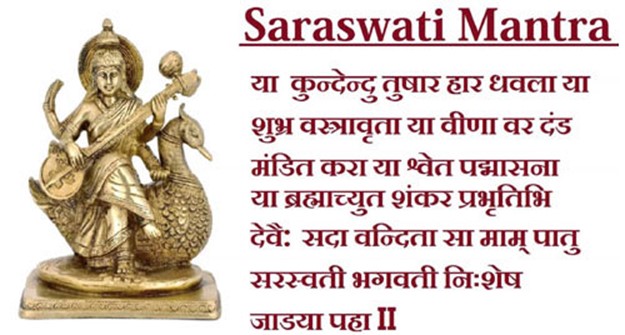 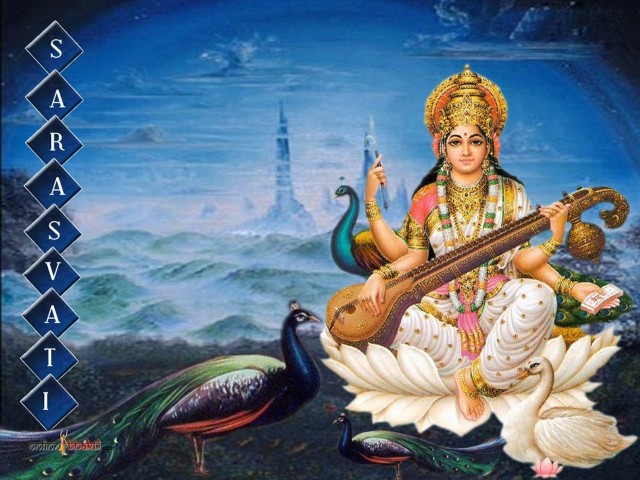 Sarasvati is defined as “Saaram vaati iti Sarasvati”, She who flows towards the Absolute is Sarasvati. For river-like streaming and fluent speech the blessings of Sarasvati would help and the mind is set free by the fluid motion of River. 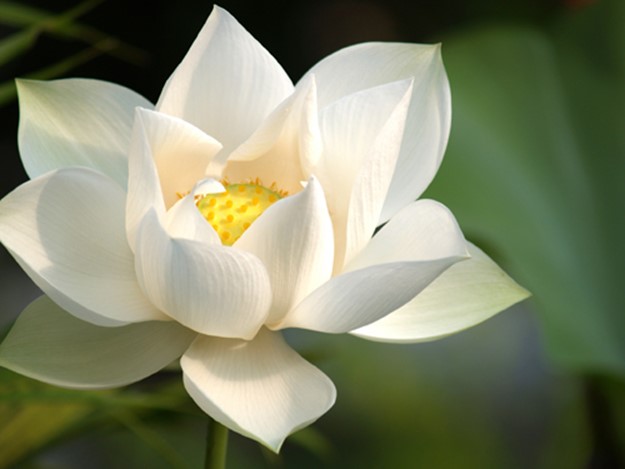 Related Blog Post : East and West – What Sets Us Apart in Learning and Creative Writing