Trouble in Tibet has millions of faces, and I am sad to add the face of Tashi Wangchuk to describe Tibet’s Trouble; tragic demise of Tibetan Language Education. 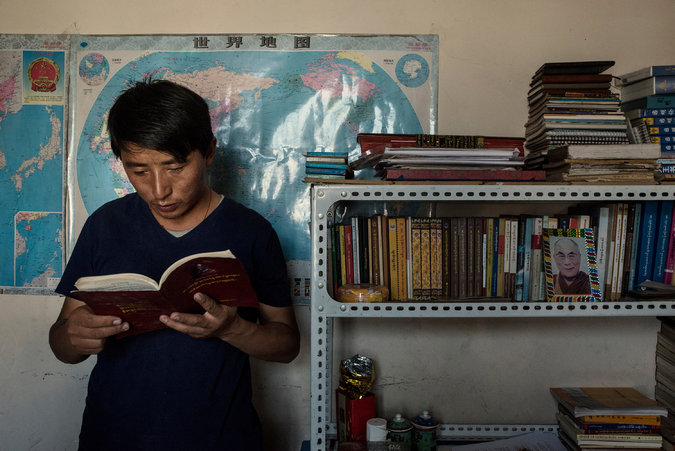 Tashi Wangchuk, a Tibetan entrepreneur and education advocate, at his home in Yushu, China, in July. Mr. Tashi was detained in January and held in secret until his family was notified this month. Credit Gilles Sabrie for The New York Times

BEIJING : A detained Tibetan entrepreneur who advocated for bilingual education in schools across Tibetan regions of China has been charged with inciting separatism, according to an official police document.

The entrepreneur, Tashi Wangchuk, 30, is being held at the main detention center in Yushu, the town in Qinghai Province in western China, where he lives with his elderly parents. Mr. Tashi could face up to 15 years in prison if found guilty, depending on the specifics of the allegations against him.

Mr. Tashi was detained on Jan.27 and held in secret for weeks. His relatives said they were not told of his detention until March 24, though Chinese law requires that a detainee’s family be notified within 24 hours. A document stating the charge against Mr. Tashi, which a police officer gave the family, and a photograph of which was seen by The New York Times, was dated March 4.

Before his detention, Mr. Tashi had written on his microblog that Tibetans needed to protect their culture and that Chinese officials should aid them in doing so. He has argued for greater Tibetan autonomy within China, but none of his known writings have called for Tibetan independence, which he has said he opposes.

A Tibetan’s Journey for Justice

Worried about the erosion of Tibetan culture and language, one man takes his concerns to Beijing, hoping media coverage and the courts can reverse what he sees as a systematic eradication.

The family said it has not been able to find a local lawyer to represent Mr. Tashi. Officials have not yet announced a trial date.

Mr. Tashi’s case has attracted international attention. Officials at the State Department are aware of his detention, and a representative of Canadian Journalists for Free Expression said the group was starting a petition to call for his release. President Obama may raise human rights issues with his Chinese counterpart, President Xi Jinping, when Mr. Xi visits Washington this week for a summit meeting on nuclear issues.

As an advocate for Tibetan culture, Mr. Tashi has been most vocal about language education, saying that schools should adopt a true system of bilingual education so that Tibetan children can become fluent in their mother language.

Mr. Tashi has said that the dearth of effective Tibetan language education, and the fact that the language is not used in government offices, violates the Chinese Constitution, which guarantees cultural autonomy for Tibetan and other ethnic regions.

Mr. Tashi runs a shop in Yushu and sells goods from the region to buyers across China on Taobao, an online platform run by Alibaba, the e-commerce giant. In 2014, Alibaba chose Mr. Tashi to be featured in a video for the company’s investor roadshow before a high-profile initial public offering. The founder and executive chairman of Alibaba, Jack Ma, was the video’s main narrator.

Late last year, Mr. Tashi was quoted in two articles in The New York Times on Tibetan language and culture. He was also the main subject of a documentary video by The Times about his attempts to use the legal system to compel officials to improve Tibetan language education.

In an interview last year, Mr. Tashi said he did not support Tibetan independence because he believed that Tibet could continue to develop economically as a part of China. He said he wanted true autonomy for Tibetan regions as guaranteed in the constitution, which he said would help preserve Tibetan language and culture.

Mr. Tashi also said in the interview that he was thankful to all the Chinese people who truly protect minorities, and he praised Mr. Xi for having promoted a democratic and law-abiding country these last few years.

Mr. Tashi had been detained briefly twice before, he and his family members have said. Once was for trying to go to India, a common destination for Tibetans who want to see the Dalai Lama, the Tibetan spiritual leader. The other detention, in 2012, was for posting online comments that criticized local officials over land seizures.