U.S. should speak out for Tibet: Nancy Pelosi & Jim McGovern

Last November, we led the first delegation of United States members of Congress the Chinese government has allowed to visit Tibet in more than eight years.

As we mark today’s anniversary of the 1959 Uprising in Tibet, the deteriorating human rights situation throughout China is deeply troubling. However, our trip has led us to believe there is a narrow but real opportunity to encourage the Chinese government to re-evaluate its policy toward Tibet.

For decades, China has severely limited foreign officials and journalists’ access to the Tibetan Plateau. Travel to Tibet was further curtailed following the Chinese crackdown on peaceful Tibetan protesters in 2008 — and the Chinese government intensified crackdowns both immediately before and after our visit.

From the moment we landed, it was evident that the Chinese authorities wanted to present a sanitized version of Tibet. In Lhasa, the authorities attempted to control what we could see, to whom we could speak and where we could go.

Nevertheless, our delegation had the rare chance to walk through the streets and visit the historic palace, temple and monastery as representatives of the U.S. government. Despite the efforts of our handlers, we were able to see beyond the façade.

China’s harsh policies in Tibet are clearly mired in the prejudices and misconceptions of the past. In our conversations with senior Chinese officials, we were saddened by the disrespect expressed toward Tibet’s unique and precious cultural, linguistic and religious heritage — not to mention the government’s scorn for His Holiness the Dalai Lama.

To make progress on the significant issues between China and Tibet, the Chinese government must set aside its outmoded attitudes toward the Tibetan people and explore the possibility of a new dialogue.Engagement with the Dalai Lama is key for designing a future for Tibet that allows for modernization while protecting and advancing Tibetan culture, language, religion and way of life.

We believe there is an opportunity for a respectful, good faith, high-level dialogue between Chinese officials and the Dalai Lama on resolving outstanding issues regarding Tibetan autonomy and the treatment of Tibetans outside of the Tibetan Autonomous Region.

During our visit, many Chinese officials who spoke with us encouraged more Americans to travel to Tibet and to China. Those statements should be honored with actions: lifting restrictions on U.S. diplomats, members of Congress, journalists and others interested in the region. The U.S. should be allowed to establish a consular office in Lhasa, in order to serve these Americans traveling to the Tibetan Plateau.

China should not fear greater openness and engagement in Tibet. The United States must emphasize this idea at the highest levels.
Sadly, the Chinese Government is showing increasing hostility toward all forms of peaceful dissent throughout China by utilizing arbitrary detention, arrest and forced disappearance of hundreds of lawyers, paralegals, law firm staff, human rights defenders and other civil society activists in Beijing.

New restrictions on freedom of expression have been enacted, especially on the Internet,in the media and in universities. The disappearance of several booksellers and publishers from Hong Kong indicates a widening crackdown by Chinese authorities against civil society everywhere.

The Chinese government has succeeded at marginalizing the discussion of grave human rights abuses in too many international forums and interactions. The democracy and human rights activists we met with in China pleaded with us for the United States to be more openly and directly engaged in these issues.

Advancing human rights is fundamental to our national values and our national security. It must be a prominent part of our conversations with the Chinese government at every level.
Our country has a responsibility to speak out in support of human rights in Tibet and elsewhere in China. If freedom-loving people do not speak out for human rights in China because of our commercial interests, then we lose our moral authority to talk about it any other place in the world.

Rep. Nancy Pelosi, D-Calif., is minority leader of the U.S. House of Representatives and a former Speaker of the House. Rep. Jim McGovern is a Massachusetts’ Democrat. 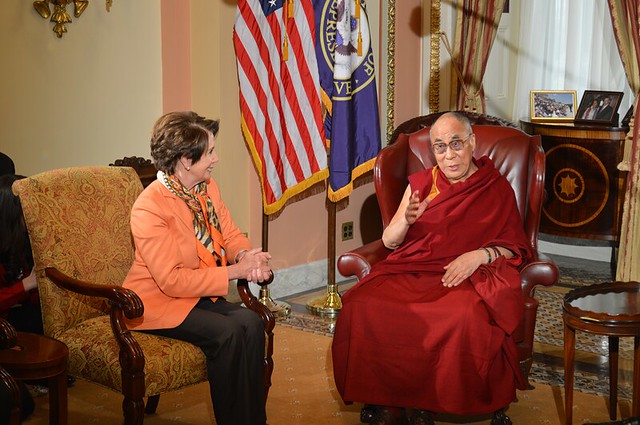