I am sharing this BBC – Travel story titled ‘The Haunting Sichuan – Tibet Highway to promote Tibet Awareness. Identity of a place is not defined by human activities like highways that man builds for his use. Identity of a place is collective legacy shared and expressed by all of its denizens. Tibet as a Land has its own legacy and a right to own its identity. For that reason, I claim that Tibet is Never Part of China.

A bus ride along one of the world’s riskiest roads leads to altitude headaches, near-death experiences and one of the last chances to see Tibet as it once was.

“Double rainbow!” a passenger on the bus yelled. “Look to the left!” We were somewhere in the Hengduan Mountains that stretch across the western portion of China’s Sichuan. Below us, twin kaleidoscope of colour hung above a rushing gorge, hundreds of meters below.

The sight was a bright spot on what had thus far been a punishing journey through one of the world’s most remote regions. Moments earlier, my fellow passengers and I had spent the better part of a half hour pulling our bus out of the mud with a rope attached to the bottom of the vehicle, more concerned about the driver toppling over the edge of the cliff than the rope’s perpetual tendency to break and leave us covered in mud. The mishap would be the first of many similar incidences, a two-week journey of breakdowns, police barricades, constant delays, headaches and altitude-induced vomit-stained windows.

But that is the price of witnessing the haunting beauty of the Sichuan-Tibet Highway, one of the world’s most dangerous, highest and most punishing roads.

Most of the 4,000km-plus loop between the Sichuan capital Chengdu and the Tibetan capital Lhasa cuts through the former region of Kham, composed mainly of the present-day Tibetan Autonomous Region, as well as of parts of former Tibet that were annexed into mainland China from the 18th Century until the mid 20th century. With mishaps included, a bus ride between any two cities in this remote region can take long enough for passengers to watch the sun both rise and set over the surrounding peaks, but winding along the precarious roads at altitudes that reach nearly 5,000m rewards the intrepid traveller with sweeping mountain views, studded with stupas, prayer flags, monasteries, otherworldly rock formations – and perhaps the occasional double rainbow.

While the Tibetan government in exile still lays claim to Qinghai and Western Sichuan, the rest of Kham – virtually everything east of the Tibetan Autonomous Region – has officially been part of mainland China since the mid 20th century. Still, the area remains vastly ethnically and linguistically Tibetan, from the gold-roofed monasteries to the red-robed monks to the yak herds grazing in the foothills.

The Chinese government recently funded the construction of the world’s highest airport in Daocheng, in southwest Sichuan, with hopes to increase tourism and help quell native Tibetan dissent. The airport, which opened in September, has cut the commute between Chengdu and Daocheng from a two-day bus ride to one-hour flight.

The airport has made it more convenient for travellers to experience Tibetan culture without the exasperating bureaucratic barriers necessary to get into Tibet, which are non-existent here: during a visit in summer 2011, I found a heightened government presence, but no restrictions, permit hassles or need to travel with a group. (Even so, be sure to check the situation before visiting as rules and restrictions can change without notice. Using a tour agency to plan also helps; the company China Highlights, for example, can provide customised itineraries to Sichuan-bound travellers.) Still, with little tourist infrastructure, extremely high altitudes and a considerable language and cultural barrier, travel here is far from easy.

The main attraction near Daocheng is the Yading Nature Reserve, about 140km south. Touted as “the last Shangri-La,” Yading is a glacial lake-filled, alpine wonderland. But it’s not only the natural beauty that draws visitors – the park is also home to monasteries, villages and visiting Tibetan pilgrims. The three holy peaks surrounding Yading have long attracted pilgrims doing a kora, or holy hike. The 30km kora around 6,032m-tall Chenresig Mountain offers incredible views of jagged snow-capped peaks, stone huts, and mountain sides festooned with prayer flags of every colour. For those uncomfortable with the trying hike at more than 4,000m, it’s possible to take short day hikes or horse trips.

If road conditions happen to be perfect, it’s a 150km, three-hour hour ride from Daocheng to Litang, a small town that moves at the pace of the tumbling tumbleweeds. Fiercely Tibetan in culture, Litang is a monastery town and birthplace of multiple Dali Lamas. It’s definitely worth the visits to the monastery and the hot springs on the edge of town, but Litang’s real attraction is the people watching. Leather-skinned old men walk through town spinning their prayer wheels while red-robed monks ride their motorcycles past nomadic herders on horseback, their hair flying in the wind above gold-toothed smiles.

Litang is also one of the more common places for sky burials; a burial site is right behind the monastery. During these ancient traditional funerals the body is cut into pieces and left for the swarming vultures that swoop down to devour the body, completing the cycle of life. To witness a sky burial, you must ask at the monastery for permission or acquire an invitation.

From Litang, a brutal 260km journey, taking seven hours by minibus (if you’re lucky), gets you to the town of Garze. The Garze Monastery is the region’s largest, home to more than 500 monks. The sprawling, gold-roofed 15th-century monastery, with its walls adorned with demons and deities, climbs up the hillside, overlooking rolling green hills and snow-capped peaks. Exploring the area – with its clay-and-wood houses, grains, chillies and vegetables drying on their flat rooftops – is as impressive as the monastery itself.

The towns in the former region of Kham are changing more slowly than most of China. Still, it won’t remain untouched forever. There are constant protests by the ethnic Tibetans about Tibet’s political situation, Han Chinese are slowly immigrating into the area and, as in the rest of China, construction has been developing for years. For several years the government has been working on a ring road that will make the area more accessible, and plans for direct flights from various Chinese cities to Daocheng will likely continue to increase the number of visitors.

For now, however, the area remains largely untouched, a reminder of the Tibet that once was.

Copyright © 2015 BBC. The BBC is not responsible for the content of external sites. 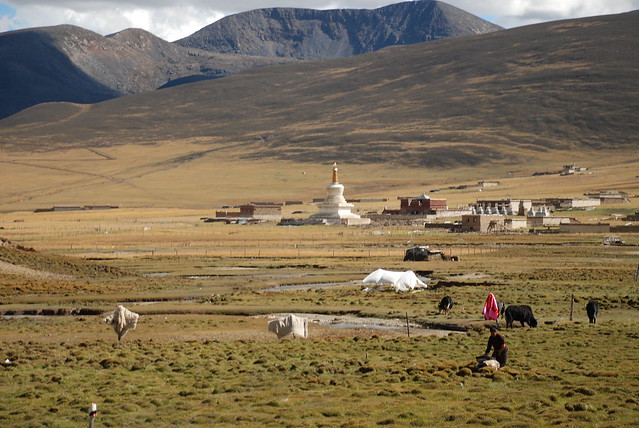 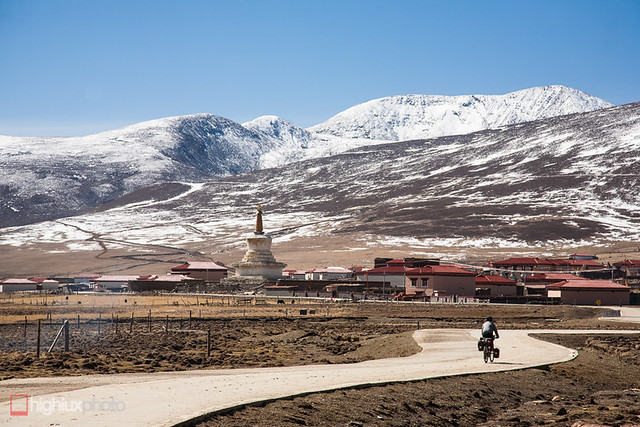