On behalf of Special Frontier Force, it is my duty to issue this RED DRAGON – RED ALERT warning people of imminent danger as United States and Red China begin their 6th Consultation On People to People(CPE), and 7th Strategic and Economic Dialogue in Washington, DC on June 23, 2015. This Consultation does not include Tibetan People, and this Dialogue does not include the problem of Neocolonialism, and Red China’s Subjugation of Tibet.

By Jason Lange and David Brunnstrom 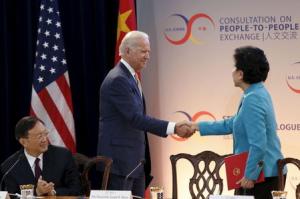 By Jason Lange and David Brunnstrom

WASHINGTON (Reuters) – The United States on Tuesday expressed deep concern about state-sponsored cyber theft and stressed the need to keep Asian sea lanes open at the start of annual talks with China, and said the world depended on the ability of the two countries to narrow their differences.

In opening statements at the wide-ranging Strategic and Economic Dialogue forum in Washington, China expressed a desire for constructive relations with the United States, and said the two sides could manage their differences – as long as they accommodated each other’s core interests.

U.S. Vice President Joe Biden said China and the United States might not resolve all of their differences during the Cabinet-level meetings that began in Washington on Monday with preliminary talks and a dinner and run into Wednesday, but should commit to working on them.

China’s Vice Premier Liu Yandong responded to Biden by saying that differences could be managed “as long as our two countries adopt an overall perspective, respect and accommodate each other’s core interests and be committed to a constructive approach to reduce misunderstanding and miscalculation.”

The Washington meetings come at a time of waning trust and widening differences between the United States and China, even though they maintain robust economic ties that last year were worth $590 billion in two-way trade.

The United States is particularly worried by massive attacks on government computers that U.S. officials have blamed on Chinese hackers and China’s pursuit of territorial claims in the South China Sea, as well as Beijing’s challenge to its dominance of global finance and restrictions on U.S. businesses in China.

Lew also said it was critical for China to move toward a more market-oriented exchange rate, repeating a U.S. mantra even though the International Monetary Fund has said the yuan is no longer undervalued.

More than 400 Chinese officials are in Washington for the talks, which involve eight U.S. Cabinet secretaries.

They come at a time when U.S. President Barack Obama is struggling to secure backing from Congress for legislation needed to speed a 12-nation trade deal, which is the economic plank of his “pivot to Asia” policy intended as a counterweight to China’s growing influence.

The two sides will try to ease tensions by stressing areas of cooperation, including climate change, shared concerns about Iran and North Korea’s nuclear programs, the fight against Islamist militancy, and support for global development.

Despite considerable tension over some issues, China is hoping for a smooth set of meetings to prepare for a visit to Washington by President Xi Jinping in September.