Subject:- The Battle Plan of Operation Eagle – Permission for Disclosure.

1. Military Secretary’s Branch, Integrated HQ MoD( Army ) in its letter ID No. A/45101/REP/MS( X ) dated 08 Jul 2011 had rejected my representation dated 24/5/2011 regarding my brother’s petition to receive a Gallantry Award that was duly recommended by Special Frontier Force which operated under the Command of Major General Sujan Singh Uban, Inspector General SFF, Directorate General of Security, R. K. Puram, New Delhi. As per the decision made by the Prime Minister of India, the Battle Plan of Operation Eagle had included the eligibility criteria for receiving Service Medals and Decorations. My brother is eligible to receive this Gallantry Award because he had participated in Operation Eagle as a Citizen of India. For example, foreign nationals like Bangla refugees who had also participated in Operation Eagle are not entitled to receive Service Medals and Decorations.

2. The Military Secretary, MoD( Army ) while rejecting my representation had also claimed that this battle action took place nearly 39 years ago. However, it must be noted that the Military Secretary has not mentioned the date or dates of this battle action. It appears that the MS Branch is not aware of this basic information or the MS Branch is deliberately concealing information with an intention to deny the grant of this Gallantry Award to an Indian National who had participated in military action on the basis of his Citizenship.

3. In the history of Republic of India, for the very first time, the Prime Minister of India had planned and had personally executed this kind of military operation( Op Eagle ) drawing assistance from nontraditional fighting elements from the Directorate General of Security.

4. Because of the historical importance of Operation Eagle, it would be in public interest to disclose the details of the Battle Plan. Since this Battle Action took place a long time ago, it is assumed that Government of India has no objection if the Battle Plan is disclosed to the People of India.

5. If you have any concerns in this matter, kindly inform me. 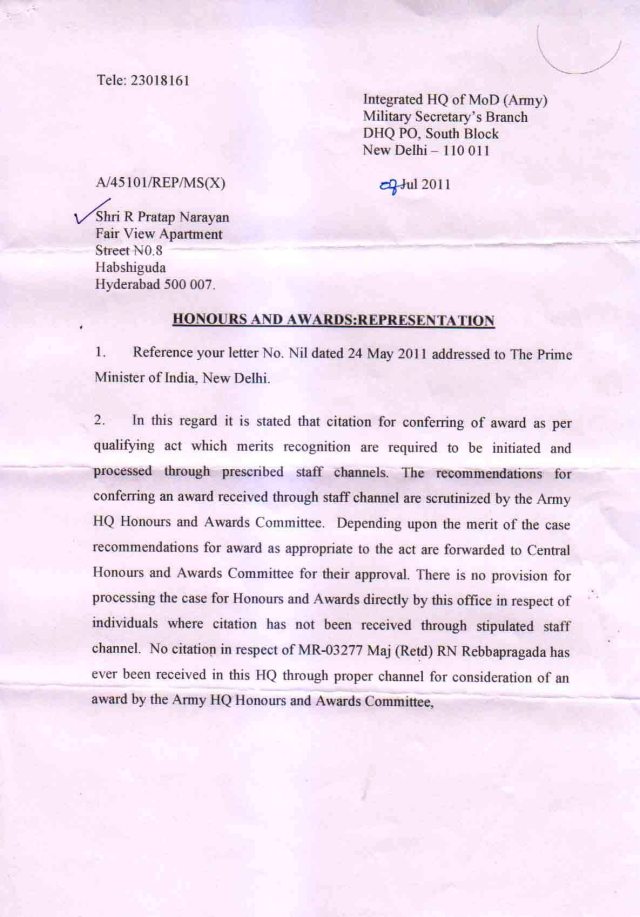