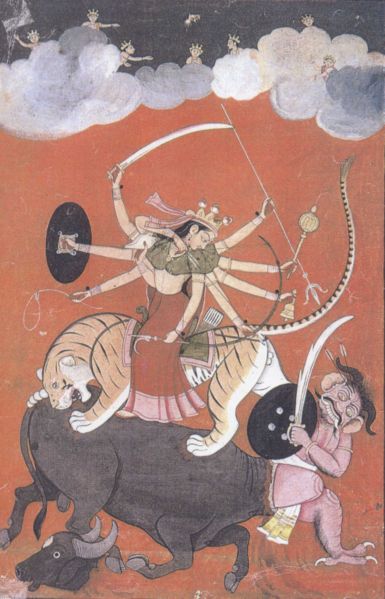 A HYMN IN PRAISE OF GODDESS SHAKTI :

The opportunity to serve in the Indian Armed Forces works like a powerful magnet.It draws into its folds the youth of the country from a multitude of villages that dot our landscape.My service in uniform gave me the wonderful opportunity to personally know and get acquainted with a broad spectrum of Indian population.The Indian Identity that I would describe is the product of such direct and first hand experience of the people of my land.

After a brief and exciting period of basic military training in the historical city of Lucknow,in the State of Uttar Pradesh,my tour of duty took me to the city of Ambala Cantonment in the State of Haryana. The name Ambala is very dear to my heart.Traditionally,Indians would not desire to fight the evil and dark forces.They would rather prefer to rely upon the names of the mighty Lords that they worship.It is Shiva,Vishnu,Rama and Krishna who would fight the battle on their behalf and Indians could simply sit back and relax and watch the demons getting vanquished.But when a physical fight becomes inevitable and when pushed to confront an enemy and to take up the challenge personally,Indians derive their strength and they get infused with courage by remembering with adoration the name of BHAVANI,also known as DURGA,AMBA,KALI or simply referred to as MATA(MOTHER).That name is used as the battle cry.That name is the Armour of divine protection they prefer to use on the front lines of war fields.When the confrontation is real,nothing works better than the sweet name of AMBA. Hence Ambala has represented to me the willingness and the determination of Indians to fight the battle against the enemy.On my second tour of duty in Ambala,I could proudly wear the emblem of Black Elephant on my left arm.Black Elephant is an elite fighting force and the military station of Ambala is its home.

I arrived in Ambala during 1970 and had reported to the Military Hospital on my very first posting.My first assignment in the Hospital was that of an internship in the surgical division.The senior surgical specialist at that time was Major Mohan Pal Dhir.The advice he had given me was that I should get acquainted with the patients and should try to know them as if they were my personal friends.I was given the charge of two surgical wards.My first priority was not learning the principles of surgery and the technique of surgical procedures.As an Officer-in-Charge of the ward,my first duty was to learn and remember the rank,name and regimental affiliation of each patient.It sounded pretty easy but in practical terms it was really difficult.The working hours were totally consumed with processing the medical information and preparing patients for surgical evaluation and procedures.My office staff would meticulously document all the personal information and there was no time to read that again.The patient interrogation is primarily intended to obtain the relevant medical information about their physical ailments and documenting the medical case history.It was easy to remember the medical information rather than their personal details.Since I had grown up in India,I had accepted the advice of my senior with some earnestness.The only way I could find time to know personally all the men in my wards was by returning to the Hospital and spend my evening hours conducting personal interviews with each one of them.We had a variety of sports and recreational facilities and a very lovely Officers’ Club right in front of our Hospital.But I had to ignore such perks of my Service.Thus my journey in uniform had included a commitment to know the men at a personal level.

A SIMPLE EXPERIMENT TO KNOW THE HEART :

Soon after I had assumed the charge of the surgical wards,during one of my evening visits,my office staff had reported that one of the patients had lost his expensive wrist watch.While taking a shower,the patient had removed the watch and forgot to recover it.Within a short time,the watch had disappeared.It was apparent that the watch got stolen by some other patient.I could have simply notified the Military Police and asked them to investigate the incident.Or,I could have used my authority and could have ordered that all patients should be confined to their beds and directed the staff to conduct a thorough search of their personal belongings.But I lack the temperament of a law enforcement official.I depend upon my ability to observe things and derive answers from such observations.What I had observed was the fact that in India,people share a common concern about truth.Truth or reality can not be concealed.Whatever a person may do,in the person’s heart,the truth is always known.If you would listen to the person’s heart,the truth could be revealed.I had announced to my staff that I would like to listen to the heart beat of each of my patient and ascertain the truth for myself.They assembled and lined up all patients in front of my office and they marched in one after the other.I conducted this little experiment in absolute silence.No questions were asked.I carefully listened to their heart beats.After having done so,I had demanded that the watch should be returned to the place from where it was picked up and if not , the truth would only bring humiliation to the culprit.The purpose of the experiment was not to directly identify the culprit but it intended to give him a chance to search his own heart and reveal the truth.Next day,when I came to work,my staff had cheerfully reported that the watch had reappeared in the bath room and was returned to the owner.

INDIA-THE LAND OF SATYA AND DHARMA :

India is the land where people’s psyche has a deeply embedded concern about SATYA(TRUTH).It is a fundamental belief of all of its people.They believe that TRUTH is GOD and they would define that GOD is TRUTH.The powerful effects of TIME would dissolve and destroy all things that are unreal and in the end only TRUTH will remain and TRUTH would prevail.On our National Emblem, the Motto of the Nation is described as ” SATYA MEVA JAYATE “(TRUTH alone would triumph).Indians cherish the value of Truth and would prefer to merge into that unchanging,ETERNAL REALITY.Nothing else would save them from certain destruction.DHARMA or Right Conduct in its simplest context would mean to Indians that they should fulfil the promise they had given.They are afraid of the consequences of a false utterance.The Story of RAMAYANA touches the hearts of Indians.It is no surprise that RAMA is their beloved Hero.He represents the values that Indians cherish to possess.The nobility of Rama lies in the fact that He had chosen to obey His father with a sincere desire that the father should fulfil the promise he had given to his wife and help him to uphold the enduring principle of adherence to Truth.

Indians carry their identity in their hearts.The identity is simply revealed by listening to their hearts.When you listen,you would know that all of them share a concern that TRUTH alone would prevail at the end of the day. As a member of medical profession, I can observe man in good health, in sickness and disease, and eventually in his death and dissolution. I also observe man’s reaction to his own condition and state of existence. I observe the physical, mental, and psychological aspects of the man’s condition. My experiment which had involved listening to the heart beats of my patients in the Surgical Ward was not intended as a ‘Lie Detector Test’. A typical Lie Detector Test describes a ‘Polygraph’ used on persons suspected of lying; it records certain bodily changes which are assumed to occur when the subject lies in answering questions. The objective of my experiment was not that of finding any bodily response or change in heart beat in response to any question. I was not trying to discover a lying person. The person who had stolen the watch knows the truth, the fact that he had stolen. Through my experiment I had tried to evoke an emotional reaction from that person. That subject had emotionally reacted to my experiment in the manner that I had expected. He had admitted the truth by simply returning the watch and I had not questioned him directly or indirectly if he had taken the watch. I did not find the lying person, but I have proved that the man had an actual psychological concern about truth.  Medicine cannot stop death and Truth cannot be delivered as a prescription. I had observed some of the funeral processions in India. People either chant “Ram Naam Satya hai” ( The name Rama is eternal Truth ), or the “Hare Rama Mantra”. Man whose physical body experiences death and dissolution could not be true. If man is mortal, Indian mind seeks comfort from an idea that is not subject to mortality.