The Union Government of India has appointed Justice Sri Krishna Committee to examine the demands of a separate State of Telangana as well as the demands for maintaining the present status of a unified Andhra Pradesh. Please visit my Home page of BhavanaJagat to view the open Testimony submitted to Justice Sri Krishna. Mylapore, Madras is my birth place. I had my high school education at Rajahmundry which shaped my spirit of Nationalism; I had my college education at Nizamabad which gave me the desire to serve the Nation to defend its existence after witnessing China’s brutal attack in 1962; and I had my professional education at Kurnool where I had expressed my thoughts about promoting National Unity and National Integration. While I was a student at Kurnool, my father had worked at Nalgonda, and Warangal and hence I had maintained my contacts with Telangana all the time. As per those ideas and thoughts, I had joined Indian Army Medical Corps during 1969 while I was a student at Kurnool Medical College, and got married during 1973 at Cuddapah with a person I met at Kurnool Medical College. Kurnool was the Capital City of State of Andhra when it first came into existence. Later, I had the opportunity to serve my country while I was posted at AOC CENTRE, Trimulgherry, Secunderabad and my wife had served the State of Andhra Pradesh working at Gandhi Hospital, Secunderabad. Telugu Unity is part of my desire to promote National Unity and National Integration. 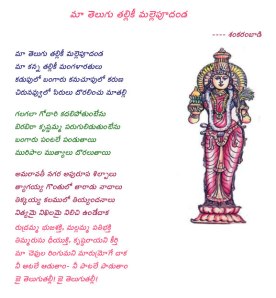