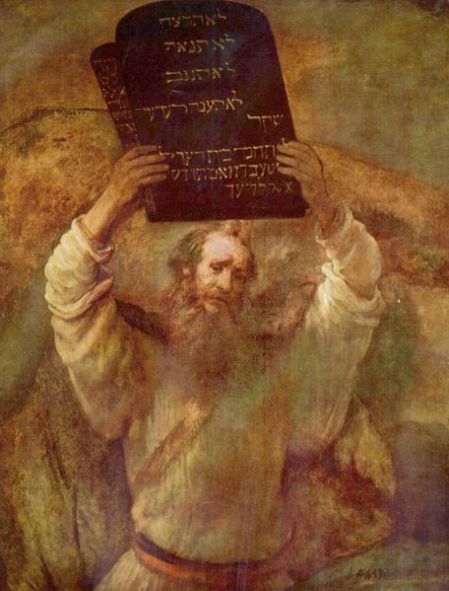 1.And God spoke all these words, saying:

2.”I am the LORD your God, who brought you out of the land of Egypt, out of the house of bondage”.

3.”You shall have no other gods before Me“.

5.”You shall not bow down to them nor serve them. For I, the LORD your God, am a jealous God, visiting the iniquity of the fathers upon the children to the third and fourth generations of those who hate Me”.

The ideas and thoughts that are expressed in the above Commandments basically oppose attitudes and personal behaviors which constitute and define Indian Identity.If I accept the Ten Commandments, even the simple practice of traditional greeting of “NAMASKAR” would be prohibited. I greet my God with ‘Namaskar’ and so also I greet my parents, my teacher, my guests, the Sun, the Light, the river, the mountain, the monkey, the cow, the plant, the tree, the rock, the idol with the same reverence and in the same way. The term ‘omnipresent’, being present everywhere at the same time describes God’s Absolute nature and Indians are culturally driven to seek divinity in all living objects and in all objects of this created world and universe. I touch and worship feet, I worship the fire, the water, the sky and the earth. I have a complete freedom of choice. I choose the object that I want to worship and do it at a time, place and manner that appeals to my free will.The Commandments intend to take away that freedom of expression and the manner in which I could worship God.

I had expressed my concerns about “The Ten Commandments” in an essay that was published in ‘The Ann Arbor News‘ in its daily edition dated Wednesday, March 1, 2000. I am reproducing the “OTHER VOICES” essay:

Indiana on verge of imposing religion on people : 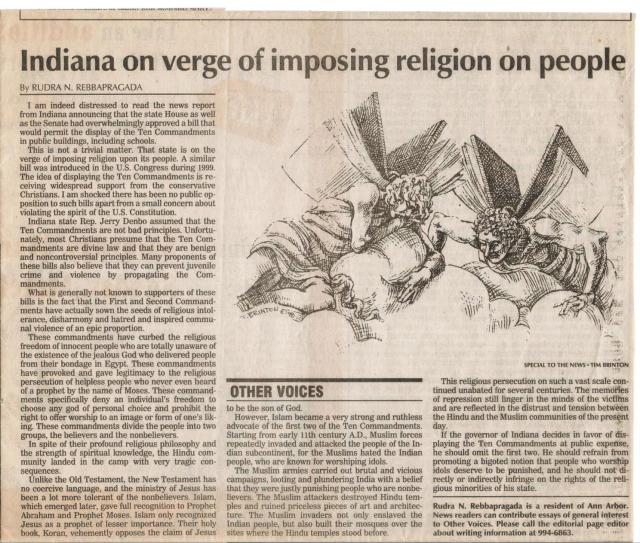 The Ten Commandments and the imposition of Religion on people.

I am indeed distressed to read the news report from Indiana announcing that the state House as well as the Senate had overwhelmingly approved a bill that would permit the display of the Ten Commandments at public buildings, including schools.

This is not a trivial matter. That state is on the verge of imposing religion upon its people. A similar bill was introduced in the U.S. Congress during 1999. The idea of displaying the Ten Commandments is receiving widespread support from the conservative Christians. I am shocked there has been no public opposition to such bills apart from a small concern about violating the spirit of the U.S. Constitution.

What is generally not known to supporters of these bills is the fact that the First and Second Commandments have actually sown the seeds of religious intolerance, disharmony and hatred and inspired communal violence of an epic proportion.

In spite of their profound religious philosophy and the strength of spiritual knowledge, the Hindu community landed in the camp of non believers with very tragic consequences.

Unlike the Old Testament, the New Testament has no coercive language, and the ministry of Jesus has been a lot more tolerant of the non believers. Islam which emerged later, gave full recognition to Prophet Abraham and Prophet Moses. Islam only recognized Jesus as a prophet of lesser importance. Their holy book Koran, vehemently opposes the claim of Jesus to be the son of God.

However, Islam became a very strong and ruthless advocate of the first two of the Ten Commandments. Starting from early 11th century A.D., Muslim forces repeatedly invaded and attacked the people of the Indian subcontinent, for the Muslims hated the Indian people who are known for worshiping idols.

The Muslim armies carried out brutal and vicious campaigns, looting and plundering India with a belief that they were justly punishing people who are non believers. The Muslim attackers destroyed Hindu temples and ruined priceless pieces of art and architecture. The Muslim invaders not only enslaved the Indian people but also built their mosques over the sites where the Hindu temples stood before.

This religious persecution on such a vast scale continued unabated for several centuries.The memories of repression still linger in the minds of the victims and are reflected in the distrust and tension between the Hindu and the Muslim communities of the present day.

If the governor of Indiana decides in favor of displaying the Ten Commandments at public expense, he should omit the first two. He should refrain from promoting a bigoted notion that people who worship idols deserve to be punished, and he should not directly or indirectly infringe on the rights of the religious minorities of his State.

The Ten Commandments pose a challenge to the survival of the seeds of ideas and thoughts that are planted in the Land of Bharat and the Indian Identity would only exist if people are willing to stand up to this challenge.