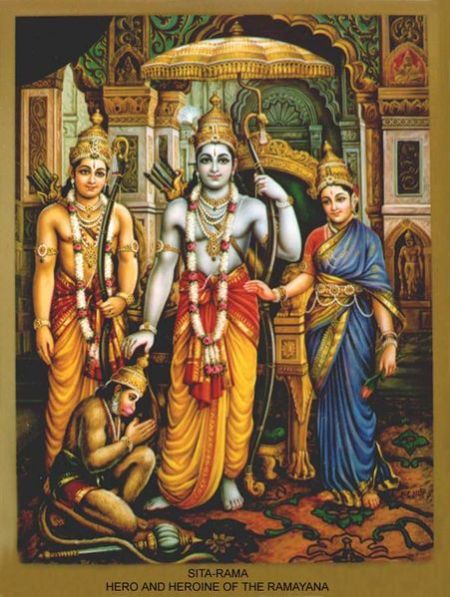 IDOL WORSHIP – A WAY OF LIFE :

Worship of idols and images is an part of daily life in many Indian homes. Long before its birth as a political entity, the Land of India was recognized by the outside world as a Land where people worship idols. The plurality of gods in daily  worship is a way of life. Indian people worship idols and images of one or another of the innumerable gods in their homes, in public places as well as in temples.

Childhood is a time of great learning experiences. A child imbibes Cultural values and learns Cultural traditions mainly at home while the child is dependent on and is educated by parents and other adults. Children acquire the Culture of the society they live in through a gradual learning process.

My childhood learning experience of idol worship occurred in two places. While I was in MYLAPORE(Madras city), the day would generally begin with a small errand. Myself and my elder brother Pratap would go out with a basket and gather flowers by just walking around in the neighborhood. Every home would keep some flowering plants which are traditionally used in daily worship. We were fond of gathering a variety of flowers for my maternal grandmother’s morning worship. It was a pleasant task and the fragrance of ‘Parijatham’ flowers that we gathered still lingers in my memory. I also spent my early childhood in RAJAHMUNDRY at my paternal grandfather’s home in Innispeta. My grandmother would also worship the morning rising ‘SUN’ before starting her idol worship. Very often, we wait in the courtyard and alert our grandmother when ‘SUN’ shows up in the sky. During the monsoon season, one has to patiently wait for the rain clouds to drift and let the ‘SUN’ come out. At the end of her worship, we were always ready to receive the offerings(PRASAD)and there was always a sense of pleasure while waiting for these daily morning treats. Childhood was spent in observing the adults and on special occasions, the children at home participate in the worship while the elders give directions. The worship at temples was done in the company of parents and elders.

I was six years old and was a fourth class student at King George Elementary School, in Innispeta of Rajahmundry. One evening, just after it became dark, my father experienced sudden abdominal pain. The intensity of his pain was very severe and he was alarmed by his condition. As the pain persisted, he started pressing people to notify others about his predicament and I remember that he had wanted that his younger brother( a doctor ) who was living in NAGPUR, should be alerted with a telegram. At one point of this painful state, my father had even asked that he should be laid on the floor in anticipation of an impending death. My two elder brothers, Hari and Pratap and myself watched this scene and were moved into action. At my eldest brother Hari’s initiative, the three of us proceeded to “RAMALAYAM”, Lord Sri Rama‘s temple which is located near the Godavari river bank, a short walking distance from our home. The temple was still open and had only a very few worshipers as night had set in. We stood before the idols in total silence and paid our respects with the traditional greeting of ‘NAMASKAR’. Temple worship is a simple act. You just need to come before the idol and you are not really required to speak out your concerns and spell out the reasons for seeking the ‘DARSHAN'(viewing the idol). It took a couple of minutes and the priest graciously gave us a mango fruit as ‘PRASAD’. Those few minutes that I had spent standing mutely before RAMA’s idol at night-time, is the reason that I would still remember and recall my father’s abdominal pain after a lapse of about fifty-three years. I had reached the temple with a sense of anxiety and with a sense of expectation that visiting the idol of RAMA would somehow help my father to get rid of that terrible pain. I had silently communicated my concern to the idol and I had received a response. The response that I had received was that of reassurance and comfort. I felt immediately relieved of a burden and felt upbeat and the feeling was one of instant gratification. Myself and my brothers returned home from the temple. I wanted to tell my father about our visiting the temple and I wanted to assure him that he would be alright if he would take a few drops of the juice from the mango fruit that we received from the priest. When we got back, the scene had changed. I did not get a chance to speak to my father and offer him the mango fruit. He had a large vomiting and threw up the food that he ate before. It helped him, his pain started to subside and he could rest without further problems. We retired for the night and the next day was just a routine day at the school. We had never discussed that painful episode again and the communication that I had received from RAMA’s idol got preserved in my memory and my family had no chance to know about it.

The rest of the world would call my visiting RAMA’s idol as an act of ‘SUPERSTITION’. My mind knows and my heart remembers that the idol had given me a sense of relief and comfort and my experience was real and genuine. Every one is welcome to take the place of that idol and if they are willing to be a source of comfort, I am willing to have their ‘DARSHAN’ and worship them just like the idols that I would like to worship.